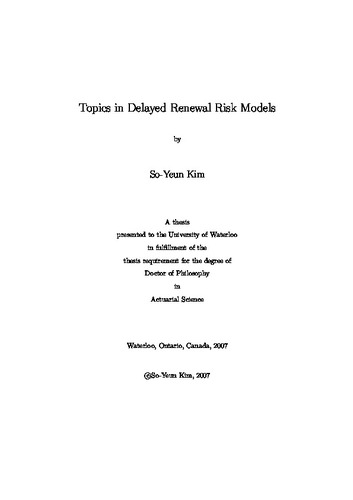 Main focus is to extend the analysis of the ruin related quantities, such as the surplus immediately prior to ruin, the deficit at ruin or the ruin probability, to the delayed renewal risk models. First, the background for the delayed renewal risk model is introduced and two important equations that are used as frameworks are derived. These equations are extended from the ordinary renewal risk model to the delayed renewal risk model. The first equation is obtained by conditioning on the first drop below the initial surplus level, and the second equation by conditioning on the amount and the time of the first claim. Then, we consider the deficit at ruin in particular among many random variables associated with ruin and six main results are derived. We also explore how the Gerber-Shiu expected discounted penalty function can be expressed in closed form when distributional assumptions are given for claim sizes or the time until the first claim. Lastly, we consider a model that has premium rate reduced when the surplus level is above a certain threshold value until it falls below the threshold value. The amount of the reduction in the premium rate can also be viewed as a dividend rate paid out from the original premium rate when the surplus level is above some threshold value. The constant barrier model is considered as a special case where the premium rate is reduced to $0$ when the surplus level reaches a certain threshold value. The dividend amount paid out during the life of the surplus process until ruin, discounted to the beginning of the process, is also considered.