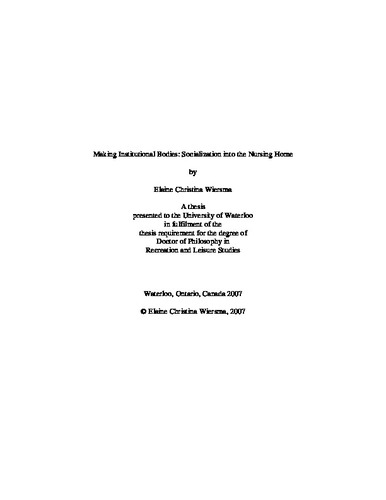 In recent years, research related to older adults and long-term care has been growing. Although much research in the past was focused on biomedical issues, more recent research has examined psychosocial issues faced by older adults within the long-term care setting. Despite the increase in literature and research on aging, long-term care, and dementia, there are still many gaps in our understanding of these phenomena. The concepts of body, self-identity, and place have received some attention over the last decade or so, but little systematic attempt has linked these concepts together, especially with relation to older adults and long-term care. In addition, the adjustment process of older adults into the long-term care facility has been examined, but the socialization processes have not been systematically examined. The purpose of this phenomenological study was to examine the process of socialization for new residents into the long-term care culture and environment, specifically focussing on how identities, bodies, and place are constructed and reconstructed by residents. Three residents were recruited for this study from a home for the aged in northwestern Ontario. Participant observation and three interviews over a six-month period with these residents focussed on concepts of place, self, and the body, as well as adjustment. Fifteen staff were also interviewed initially to gain an understanding of the long-term care environment and culture. Thirteen staff and two family members were interviewed at the end of the six-month period to gain an understanding of their perceptions of the resident’s transition into the long-term care facility. The findings indicate that a dismantling of the self occurs prior to coming into long-term care. Life in long-term care was described as living an altered life. Once admitted to the home for the aged, two types of socialization processes occurred—institutional and (inter)personal. Institutional socialization processes consisted of placing the body, defining the body, focussing on the body, managing the body, and relating to the body. Placing the body refers to the placement within the physical and social environment, residents’ adjustment to a new place, and how space within the facility was used. Defining the body refers to the assessments that were used just after admission which were focussed on the body as dysfunctional and limited. Focussing on the body occurred through the institution’s focus on body care, as well as the residents’ focus on their aging and unpredictable bodies, with a greater awareness of mortality and the immanence of death. Managing the body occurred through routines, risk management, and waiting. Finally, relating to the body referred to the boundaries of relationships that were defined, both resident relationships and staff relationships. The (inter)personal socialization processes capture the ways that residents internalized the institutional socialization processes. Internalizing the body refers to being a number and being a burden. Accommodating the body suggests ways in which residents complied to the institutional socialization processes. Accepting-resisting the body refers to the struggle residents had in accepting and fighting becoming a body, body limitations, and life in the institution. Re-creating the body illustrates ways in which residents reclaimed the body and alternative identities. All of these processes came together to create institutional bodies. These findings lead to a greater understanding of the ways in which body, self and identity, and place are intertwined. The institution served as a container for life, defining each of the lifeworld existentials. Lived space became institutional space, as personal space was redefined by the institution. Lived time also became structured by the institution, as temporal dimensions were defined by institutional time. The lived other became the institutional other, as staff became institutional brokers, attempting to balance the needs of the residents while adhering to the rules and regulations of the institution. The lived body also became the institutional body. The care encounter brought these dimensions together, and was the site for the production of institutional bodies. The findings of this study invite a rethinking of conceptions of the body and old age, particularly within the context of institutionalization, with bodies viewed as repositories of memories and containing both youth and age, rather than age as a ‘mask’. Residents exist within paradoxical rhythms of life, and thus, old age and institutionalization are not easily defined or theorized, but rather, reflect the complexity of lived experience.