The Effect of Prior Commitment on Group Conflict in Judgemental Tasks 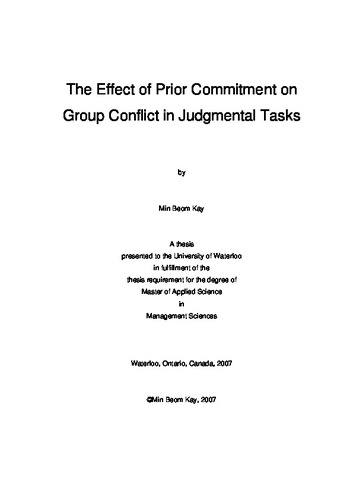 Previous research has identified commitment as one of the major contributing factors in group conflict and this study extends this line of research by considering group conflict as a result of varying members’ prior commitment for groups working on judgmental tasks with a unanimous decision rule. The goal of the group working on a judgmental task is to reach consensus but unanimous decision rule further complicates the decision making process as it requires every member to agree with group’s decision. Given this setting, prior commitment was expected to result in higher group conflict and this elevated level of conflict to have more negative affect on the group. With three judgmental cases formulated, subjects were divided into post-decision and pre-decision groups. In the post-decision groups, each subject was individually presented with each case first and committed to his own decision. With these prior commitments, subjects reached a unanimous decision through a group discussion. In the pre-decision groups, subjects reached a group decision without any prior commitment to their own decisions. Results showed signs of prior commitment contributing to group conflict. Furthermore, the post-experimental questionnaire showed that higher group conflict translates to more negative affects on the perceived performance, the extent to which members agree with the group’s decision, feeling toward other members and willingness to work with the same group.