All Roads Lead to Rome: Canada, the Freedom From Hunger Campaign, and the Rise of NGOs, 1960-1980 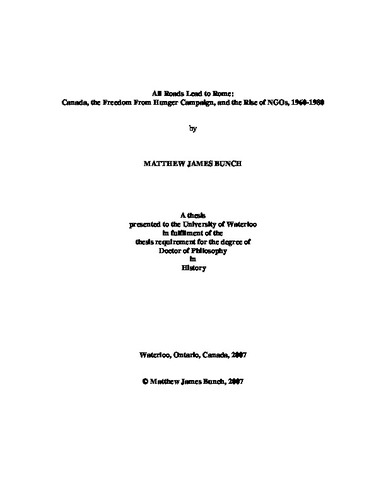 The United Nations Food and Agricultural Organization’s Freedom From Hunger Campaign was a world wide campaign to raise awareness of the problem of hunger and malnutrition and possible solutions to that problem. The Campaign was launched in 1960, and brought UN Agencies, governments, NGOs, private industry, and a variety of groups and individuals together in cooperation and common cause. FAO Director- General B.R. Sen used FFHC to modernize the work of international development and to help transform FAO from a technical organization into a development agency. FFHC pioneered the kinds of relationships among governments, governmental organizations, NGOs, and other organizations and agencies taken for granted today. Canada was one of more than 100 countries to form a national FFH committee, and support for the Campaign in Canada was strong. Conditions in Canada in the 1960s favoured the kind of Campaign Sen envisioned, and the ideas underpinning FFHC resonated with an emerging Canadian nationalism in that period. The impact of FFHC can be identified in the development efforts of government, Canadian NGOs, private industries, and a variety of organizations. Significantly, the reorganization of Canada’s aid program and institutions reflected closely developments at FAO and FFHC. Participation in FFHC had important, lasting effects in Canada, and Canada made one of the strongest contributions to the Campaign.