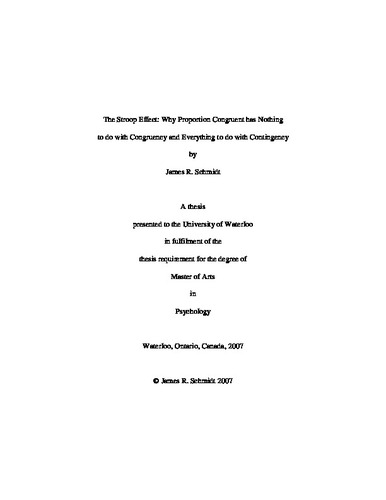 Participants are slower to identify the print colour of incongruent colour words (e.g., the word ORANGE printed in green) than of congruent colour words (e.g., ORANGE printed in orange). The difference in time between these two conditions is the Stroop effect. The item-specific proportion congruent (ISPC) effect is the observation that the Stroop effect is larger for words that are presented mostly in congruent colours (e.g., BLUE presented 75% of the time in blue), and smaller for words that are presented mostly in a given incongruent colour (e.g., YELLOW presented 75% of the time in orange). One account of the ISPC effect, the modulation hypothesis, is that participants use the distracting word to modulate attention to the word (i.e., participants allow the word to influence responding when it is presented mostly in its congruent colour). Another account, the contingency hypothesis, is that participants use the word to predict the response that they will need to make (e.g., if the word is YELLOW, then the response is probably orange). Reanalyses of data from Jacoby, Lindsay, and Hessels (2003) along with results from new experiments are inconsistent with the modulation hypothesis, but entirely consistent with the contingency hypothesis. A mechanistic account of how responses are predicted is generated from the contingency hypothesis.