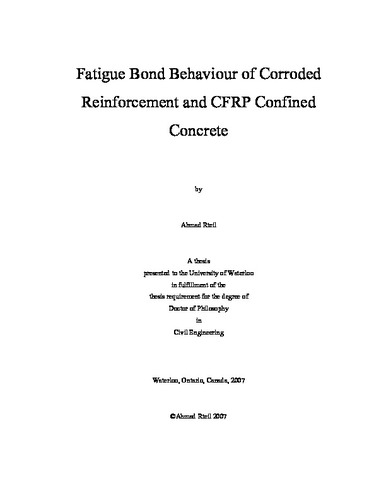 Bond in a reinforced concrete (RC) structure is the interaction force that transfers force between the steel and concrete. It influences the structural performance and serviceability of a structure under both static and cyclic loading. Corrosion of reinforcing steel in RC structures is the primary reason behind bond loss in RC elements. A loss of bond in concrete results in a decrease in the serviceability strength and eventually causes a brittle and sudden failure. Structures, such as bridges, are vulnerable to corrosion and at the same time are subjected to repeated loading rather than static loading. Nevertheless, little experimental or analytical studies that address the problem of corroded steel-concrete bond under repeated loading exist. This study was aimed at increasing the understanding of the behaviour of bond between corroded reinforcing steel bars and concrete for structures subjected to repeated loading. In addition, the effect of fibre reinforced polymers (FRP) as a rehabilitation method was assessed. Fibre reinforced polymers is considered to be a state-of-the art rehabilitation material due to its advantages, such as high strength, light weight and ease of handling and application. Forty-seven anchorage-beam specimens were cast and tested. The specimens’ dimensions were 152 x 254 x 2000 mm reinforced with two 20M bars. The steel reinforcement in a specimen was unbonded except for 250 mm from each end. This bonded length was selected to ensure a bond failure. The corrosion was induced using an accelerated corrosion process. The parameters investigated were the corrosion level (0, 5 and 9% measured mass loss), whether the specimen was wrapped in the anchorage zone with a U-shaped carbon fibre reinforced polymer (CFRP) sheets or not, and the load range applied. The minimum load applied was 10% of the static bond capacity of the specimen. The maximum load was varied to give the desired range of fatigue lives (103 to 106 cycles). The test frequency for all repeated tests was 1.5 Hz. Results showed that the repeated loading either pushed the bottom concrete cover away from the steel bar by wedge action for unwrapped beams or cracked and crushed the CFRP confined bottom concrete cover for wrapped beams. The concrete damage caused the bond stress to undergo a gradual redistribution, moving the peak bond stress from the loaded end towards the free end, resulting in failure of the specimens by fatigue of bond. Corrosion levels of 5% and 9% decreased the fatigue bond strength on average by 19%. The rate of slip of the steel bar increased as the corrosion level increased. CFRP sheets changed the mechanism by which the concrete resist the bond forces by engaging the bottom cover. This in turn increased the fatigue bond strength at all corrosion levels on average by 31% compared to unwrapped specimens. Based on the test results and observations, a hypothesis of the mechanics of bond under repeated loading was postulated and a fatigue slip-growth analysis (similar to the fracture mechanics crack growth approach) was proposed to calculate the fatigue life of a specimen that fail in bond. The proposed analysis was in reasonable agreement with the experimental results.