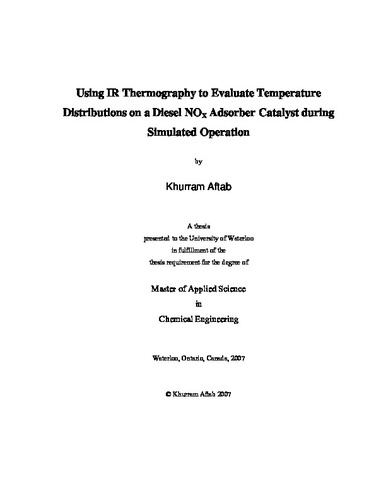 In emissions catalyst applications, an axial distribution of reaction, surface chemistry, and temperature all exist on or along the surface of the catalyst. Understanding these distributions is very important in developing physically relevant models of such systems. One focus of this work was developing a technique to obtain accurate temperature measurements from a catalyst during exothermic or endothermic reaction steps. IR thermography was tested as a method to evaluate spatial temperature distributions as a function of time on a diesel NOX adsorber catalyst. The technique proved accurate, relatively simple to interpret and operate, and efficient to the extent it can be used for data generation. As a continuation of the technique development, the temperature changes and gradients formed during simulated operation of a Pt/Ba/Al2O3 NOX adsorber catalyst (NAC) for diesel exhaust applications were monitored using IR thermography and standard thermocouples. NACs operate in a cyclic manner; during the lean phase, when the engine is in normal operation, the catalyst traps entering NOX; once the catalyst nears saturation, the catalyst is exposed to a rich exhaust phase, in reductant relative to oxygen, where the trapped NOX is reduced to N2; and finally the exhaust returns to the normally lean conditions thereby completing the cycle. During the rich phase, previous work has suggested that significant temperature changes might be occurring along the length of the catalyst. In this study, temporally and spatially resolved temperature distributions were obtained throughout the cycle in order to evaluate the significance of these temperature changes and their effects on the reaction chemistry. The effects of (1) reactor in the possible reaction pathways, (2) CO and O2 levels in the regeneration phase, (3) NO and NO2 as the source of NOX in the lean cycle and (4) nominal operating temperature on these temperature distributions were evaluated. The temperature gradient and distribution measurements are being used to characterize the reactions and as input into models.