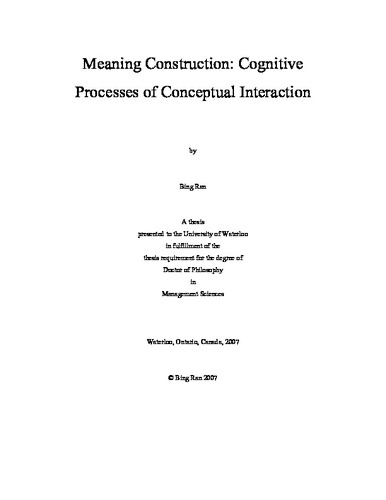 This thesis proposes a theoretical framework explaining cognitive processes of meaning construction through conceptual interactions. It was noted that while the nine models or theories (Fuzzy Sets, Selective Modification model, Amalgam theory, Concept Specialization model, Composite Prototype Model, Dual-Process model, Constraint model, CARIN model, and Coherence Theory) in literature on conceptual combination offered insights on the problem of how people understand conceptual combinations, most of them assumed a schematic representation of our knowledge of concepts. However, it is possible that our minds represent knowledge in less structured ways and that schematic structure may not necessarily play a role in making sense of conceptual combinations. In this thesis, I attempted to make fewer assumptions about how knowledge is represented to explain the cognitive processes of conceptual combinations. I assume that concepts are related to other concepts, and knowledge can be represented by associations among concepts. Based on this assumption, the meaning of a conceptual combination is constructed through interactions between these associated concepts. It is proposed that the cognitive processes involved in meaning construction start from a distinction between different roles each component concept plays (head or modifier), and then a system of associations are activated contingently, prototypically, and efficiently with the goal of forming a cognitive field (analytically represented as a closed cycle) to connect head and modifier in a balanced way. The balanced system of concepts is strengthened further by reconciling remaining tensions in the field. Experimental results confirmed that component concepts in a combination activate associations contingently, and prototypicality and balance are major factors influencing whether an association will be activated by the combination to construct the meaning. Head / Modifier and Novelty were also studied as moderating variables. The experimental results indicated that head is a stronger moderator for association activation than modifier, and novelty was not found to be a significant moderator in association activation. Implications of these findings are discussed and future research is identified.