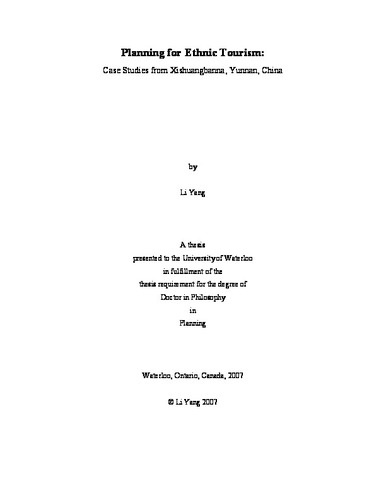 Ethnic tourism has emerged as a means that is employed by many countries to facilitate economic and cultural development and to assist in the preservation of ethnic heritage. However, while ethnic tourism has the potential to bring economic and social benefits it can also significantly impact traditional cultures, ways of life and the sense of identity of ethnic groups. There is growing concern in many places about how to balance the use of ethnicity as a tourist attraction with the protection of minority cultures and the promotion of ethnic pride. Despite the fact that a substantial literature is devoted to the impacts of ethnic tourism, little research has been done on how to plan ethnic tourism attractions or to manage community impacts of tourism. This research addresses the need for more research on planning for ethnic tourism by exploring the status and enhancement of planning strategies for ethnic tourism development. Drawing upon existing literature, a conceptual framework was developed and adopted to study ethnic tourism in a well-known ethnic tourist destination in China – Xishuangbanna, Yunnan. The research analyzes how ethnic tourism has been planned and developed at the study site and examines associated socio-cultural and planning issues. The framework is employed to compare and evaluate the perspectives of four key stakeholder groups (the government, tourism entrepreneurs, ethnic minorities and tourists) on ethnic tourism through on-site observation, interviews with government officials, planners and tourism entrepreneurs, surveys of tourists and ethnic minority people, and evaluation of government policies, plans and statistics. Economic advantages have been a driving force in ethnic tourism development. The government and tourism entrepreneurs are the main powers in developing ethnic tourism, but most of them are not ethnic members. Their administrative and commercial involvement in tourism strongly shapes the ways of staging, packaging and representing ethnic culture in tourism sites. Authenticity of attractions is not determined by the resource providers, the ethnic minorities, but is shaped by decisions of government and entrepreneurs. The commodification of ethnic culture and the production of cultural events and other tourist products are manipulated to fit the interests of business and political mandates. Minority people are usually marginalized or disadvantaged economically and politically because they have limited control over tourism resources and activities. Most minority people employed in tourism hold only low-paying jobs. The findings show that the production and commodification of ethnic culture is often accompanied by tensions among economic, political and cultural goals. Economic motives often outweigh other goals in tourism development. Thus, the balance between the use of tourism as a form of economic development and the preservation of ethnic culture should be addressed in tourism planning. More effective planning is required to mitigate negative impacts and to reinforce the positive aspects of ethnic tourism.