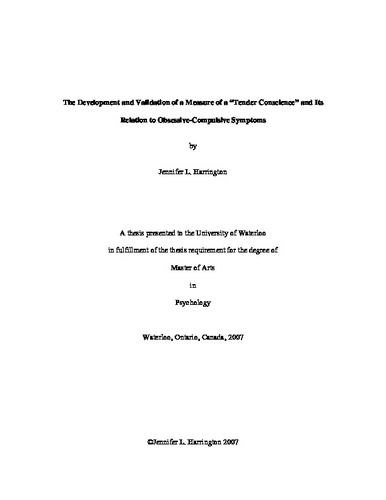 Cognitive behavioural models of obsessive-compulsive disorder (OCD) suggest that catastrophic misinterpretations of intrusive thoughts are at the heart of this disorder’s onset and maintenance (Salkovskis, 1985; Rachman, 1997, 1998). Indeed, empirical work has demonstrated that individuals with OCD are prone to a variety of cognitive biases (e.g., selective attention, thought-action fusion, and an inflated sense of responsibility). Although research has established the existence of cognitive biases, it is not yet known why individuals develop these maladaptive thinking patterns. Nonetheless a number of theorists have suggested that an underlying personality style, namely a “tender conscience,” might serve as vulnerability factor to OCD (Rachman & Hodgson, 1980; Rachman, 1998). Relatively little work has addressed the relationship between personality and OC symptoms; consequently, two studies were designed to further elucidate the nature of this relationship. In the first study, the construct of a “tender conscience” was operationalized and a self-report questionnaire was developed. The questionnaire was then administered to a group of undergraduate students (N = 407). Data analyses indicated that the psychometric properties of the scale were satisfactory, with an internal consistency estimate of .86 and test-retest reliability of .77. Additionally, an exploratory factor analysis was conducted, and a four-factor solution was retained that explained 33.6% of the variance. The second study sought to determine the construct validity of the newly developed measure and its relationship to obsessive-compulsive symptoms in an undergraduate sample (N = 155). As expected, a “tender conscience” was negatively correlated with the Self-Report Psychopathy Scale-III (Williams, Nathanson & Paulhus, 2003). Furthermore, a “tender conscience” was positively correlated with the traits of Agreeableness and Conscientiousness, and negatively correlated with Emotional Stability - as assessed with the International Personality Item Pool (Goldberg, 1999). However, the relationship between a “tender conscience” and OC symptoms was less clear. Nonetheless, the data provide some preliminary evidence to suggest that a “tender conscience” may serve as a vulnerability factor to obsessional problems.

Jennifer L. Harrington (2007). The Development and Validation of a Measure of a “Tender Conscience” and Its Relation to Obsessive-Compulsive Symptoms. UWSpace. http://hdl.handle.net/10012/3121