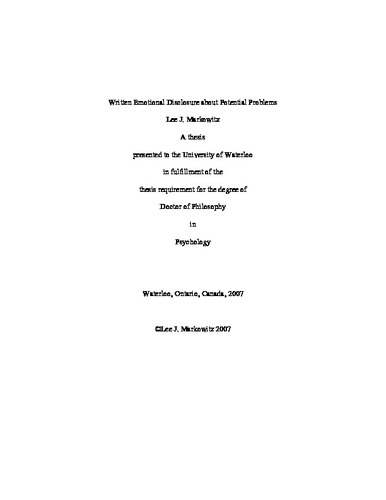 According to leading psychosocial models of worry, the reduced imagery and concreteness of worries may prevent emotional processing and ultimately maintain fear. Given that Pennebaker’s written emotional disclosure paradigm may facilitate emotional processing, the present study investigated whether writing about potential problems about which individuals were worried had physical and psychological health benefits similar to the benefits of writing about other emotionally meaningful topics (e.g., decreased physician visits, reduced symptoms of psychopathology). Participants were randomly assigned to write either emotionally or objectively about a potential problem worrying them or a neutral topic (a 2 x 2 between-participants design). Each group completed four 15-min writing sessions on four consecutive days. Physician visits, generalized anxiety symptoms, trait worry, and problem appraisals were monitored six weeks before (visits), immediately after (all variables), one month after (symptoms, worry, and appraisals), and 3 months after (visits) writing. Contrary to past research, the present research revealed no beneficial effects of written emotional disclosure about potential problems. However, among emotional disclosure participants who wrote about the same worry across all four writing sessions, there was a subsequent decrease in trait worry scores one month later. Affective data suggested that disclosure facilitated slight fear activation and habituation, although these effects were small. Potential reasons for these findings and suggestions for future research are discussed.