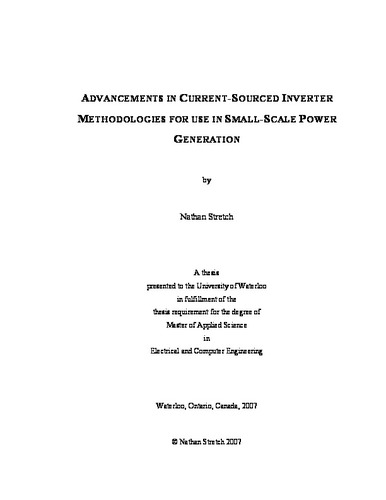 As the costs of large-scale power generation and transmission rise, distributed generation is becoming a prevalent alternative used by a growing number of both residences and businesses. Distributed generation systems typically consist of two main components: a small-scale, often high-efficiency or renewable power source, such as a fuel cell, solar panel, or wind turbine, and a power electronic converter to convert the raw power produced by the source to a usable form. In North America, the majority of power used in residential and light commercial locations is provided in a form known as single-phase three-wire, or split-phase. This consists of two half-phase AC voltages, each of 110 to 120V rms, and one combined AC voltage of 220 to 240V rms. It is therefore necessary for distributed generation systems to supply power in this same form so that it can be used by standard loads such as lighting or appliances, and the excess power can be fed back into the distribution grid. The most common type of converter used to make this conversion is the voltage-sourced inverter (VSI). There are, however, some advantages to using a current-sourced inverter (CSI) instead. These include improved output voltage waveform quality, built-in voltage boost, and built-in overcurrent protection. However, there are also two obstacles that have prevented the adoption of current-sourced inverters to date. The first obstacle to the use of current-sourced inverters is that they require a DC current input to operate. Therefore, a circuit and control algorithm must be developed to produce a DC current from a low DC voltage source. The first part of this thesis deals with the generation of a suitable DC current. The second major obstacle to adopting current-sourced inverters is that no algorithm for producing single-phase three-wire outputs with a CSI presently exists in literature. The second part of this thesis develops such a switching algorithm, using a three-leg current-sourced inverter. The algorithm is demonstrated using simulation and experimental results, which show that the proposed system is able to successfully generate balanced output voltages under unbalanced loading conditions while equalizing switch utilization and minimizing output voltage ripple.