Dynamics and Control of a Piano Action Mechanism 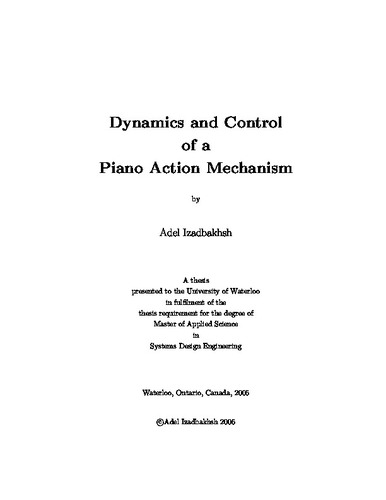 The piano action is the mechanism that transforms the finger force applied to a key into the motion of a hammer that strikes a piano string. This thesis focuses on improving the fidelity of the dynamic model of a grand piano action which has been already developed by Hirschkorn et al. at the University of Waterloo. This model is the state-of-the-art dynamic model of the piano in the literature and is based on the real components of the piano action mechanism (key, whippen, jack, repetition lever, and hammer). Two main areas for improving the fidelity of the dynamic model are the hammer shank and the connection point between the key and the ground. The hammer shank is a long narrow wooden rod and, by observation with a high-speed video camera, the flexibility of this part has been confirmed. In previous work, the piano hammer had been modelled as a rigid body. In this work, a Rayleigh beam model is used to model the flexible behaviour of the hammer shank. By comparing the experimental and analytical results, it turns out that the flexibility of the hammer shank does not significantly affect the rotation of the other parts of the piano mechanism, compared with the case that the hammer shank has been modelled as a rigid part. However, the flexibility of the hammer shank changes the impact velocity of the hammer head, and also causes a greater scuffing motion for the hammer head during the contact with the string. The connection of the piano key to the ground had been simply modelled with a revolute joint, but the physical form of the connection at that point suggests that a revoluteprismatic joint with a contact force underneath better represents this connection. By comparing the experimental and analytical results, it is concluded that incorporating this new model significantly increases the fidelity of the model for the blows. In order to test the accuracy of the dynamic model, an experimental setup, including a servo motor, a load cell, a strain gauge, and three optical encoders, is built. The servo motor is used to actuate the piano key. Since the purpose of the motor is to consistently mimic the finger force of the pianist, the output torque of the motor is controlled. To overcome the problem associated with the motor torque control method used in previous work, a new torque control method is implemented on a real-time PC and a better control of the motor torque output is established. Adding a more realistic model of the piano string to the current piano action model and finding a better contact model for the contacts that happen between the surfaces that are made of felt (or leather), are two main areas that can be worked on in the future research. These two areas will help to further increase the fidelity of the present piano action model.