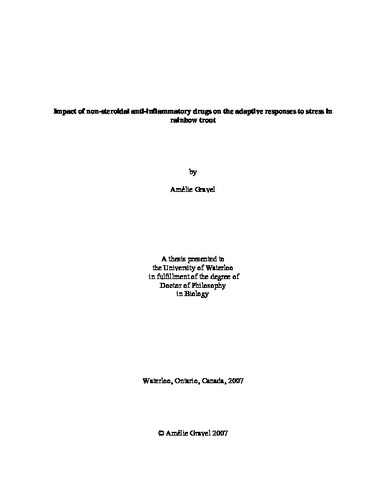 Pharmaceutical drugs are used extensively by humans and domestic animals. The detection of compounds such as non-steroidal anti-inflammatory drugs (NSAIDs) in effluents of sewage treatment plants and surface waters has raised concerns about whether these drugs have the potential to impact aquatic organisms. However, little is known about either the mechanism of action of NSAIDs or their impact on aquatic organisms. A key indicator of animal stress performance is the elevation in plasma cortisol levels, the primary circulating corticosteroid in teleosts, and the associated metabolic changes in response to stressor exposure. The secretion of cortisol is under the control of the hypothalamus-pituitary-interrenal (HPI) axis with the terminal step involving the activation of interrenal steroidogenesis by adrenocorticotropic hormone (ACTH) from the pituitary gland. Cortisol, predominantly via glucocorticoid receptor (GR) activation, is involved in a wide array of animal functions, including growth and metabolism, osmo- and iono-regulation, stress and immune function and reproduction, all of which play a role in regaining homeostasis after stressor insult. The overall objective of this thesis was to investigate the role of NSAIDs in impacting the evolutionarily-conserved adaptive stress response in a model teleost fish, the rainbow trout (Oncorhynchus mykiss). Specifically, the impact of NSAIDs on stress coping mechanisms was investigated by examining: i) interrenal steroid biosynthetic capacity and cortisol production, ii) target tissue GR function, iii) cellular heat shock protein response, iv) tissue-specific metabolic response to stressors, and iv) ionoregulatory performance in seawater. The experimental approach involved a series of whole animal in vivo and in vitro studies, using rainbow trout interrenal cell preparations, with two NSAIDs, salicylate and ibuprofen, commonly detected in our surface waters. Fish were subjected to stressors of varying intensity and duration, including handling disturbance, heat shock and salinity exposures, to identify targets impacted by NSAIDs in fish. NSAIDs did not affect resting plasma cortisol levels but disrupted the acute ACTH-stimulated corticosteroidogenesis in vitro and stressor-induced plasma cortisol response in vivo. The mode of action of NSAIDs in disrupting cortisol production involves inhibition of the key rate-limiting step, the steroidogenic acute regulatory protein (StAR), in steroidogenesis. Also, tissue (brain, liver and gill) GR protein content is a target for endocrine disruption by NSAIDs leading to abnormal negative feedback regulation of plasma cortisol levels and reduced target tissue responsiveness to cortisol after stressor exposure. The drugs also clearly affected the cellular stress response in rainbow trout by perturbing the expression of heat shock protein 70 (hsp70), a highly conserved stress coping mechanism. This impaired heat shock response with NSAIDs corresponded with an altered tissue metabolic capacity suggesting disturbances in biochemical adjustments to stressor. Specifically, the dynamics of glucose, the primary fuel to cope with the enhanced tissue metabolic demand, was disrupted in a drug-specific manner in rainbow trout. Exposure to NSAIDs also disrupted the ionoregulatory mechanisms critical for seawater acclimation in rainbow trout. The targets for ionoregulatory disturbance in seawater by NSAIDs include the major ion transporter gill Na+/K+-ATPase as well as gill GR, a key signaling protein for Na+/K+-ATPase upregulation in fish. Altogether, NSAIDs disrupt the adaptive endocrine and metabolic stress coping mechanisms in rainbow trout. The targets for endocrine disruption by NSAIDs include multiple sites along the HPI axis as well as target tissue response to cortisol action in fish. Specifically, the mode of action of NSAIDs involves disruption of StAR and GR, two key proteins critical for cortisol production and target tissue responsiveness to this steroid, respectively. While the work presented here identified the mechanism(s) of action of NSAIDs, the environmental relevance of this finding, specifically the impact of concentrations of NSAIDs present in our waterways on fish stress performance, remains to be explored.