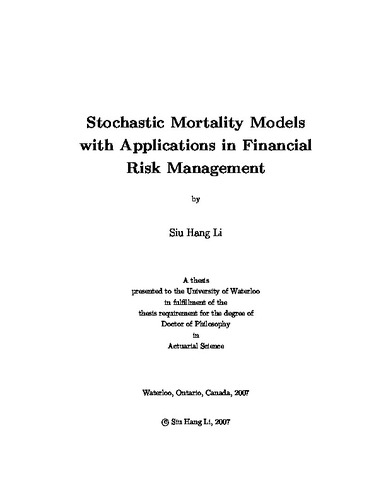 In product pricing and reserving, actuaries are often required to make predictions of future death rates. In the past, this has been performed by using deterministic improvement scales that give only a single mortality trajectory. However, there is enormous likelihood that future death rates will turn out to be different from the projected ones, and so a better assessment of longevity risk would be one that consists of both a mean estimate and a measure of uncertainty. Such assessment can be performed using a stochastic mortality model, which is the core of this thesis. The Lee-Carter model is one of the most popular stochastic mortality models. While it does an excellent job in mean forecasting, it has been criticized for providing overly narrow prediction intervals that may have underestimated uncertainty. This thesis mitigates this problem by relaxing the assumption on the distribution of death counts. We found that the generalization from Poisson to negative binomial is equivalent to allowing gamma heterogeneity within each age-period cells. The proposed extension gives not only a better fit, but also a more conservative prediction interval that may reflect better the uncertainty entailed. The proposed extension is then applied to the construction of mortality improvement scales for Canadian insured lives. Given that the insured lives data series are too short for a direct Lee-Carter projection, we build an extra relational model that could borrow strengths from the Canadian population data, which covers a far longer period. The resultant scales consist of explicit measures of uncertainty. The prediction of the tail of a survival distribution requires a special treatment due to the lack of high quality old-age mortality data. We utilize the asymptotic results in modern extreme value theory to extrapolate death probabilities to the advanced ages, and to statistically determine the age at which the life table should be closed. Such technique is further integrated with the Lee-Carter model to produce a stochastic analysis of old-age mortality, and a prediction of the highest attained age for various cohorts. The mortality models we considered are further applied to the valuation of mortality-related financial products. In particular we investigate the no-negative-equity-guarantee that is offered in most fixed-repayment lifetime mortgages in Britain. The valuation of such guarantee requires a simultaneous consideration of both longevity and house price inflation risk. We found that house price returns can be well described by an ARMA-EGARCH time-series process. Under an ARMA-EGARCH process, however, the Black-Scholes formula no longer applies. We derive our own pricing formula based on the conditional Esscher transformation. Finally, we propose some possible hedging and capital reserving strategies for managing the risks associated with the guarantee.