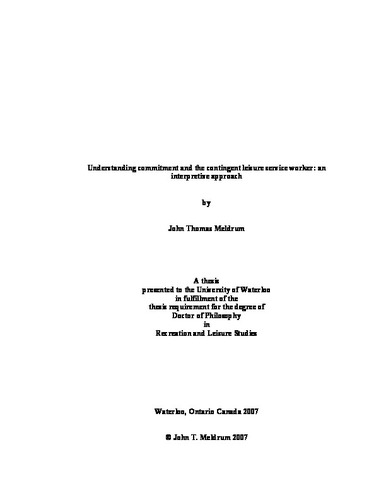 Over the past few decades, hundreds of empirical investigations have examined the construct of “workplace commitment”. Much of this research is based on the assumption that commitment is tied to longevity within a given organization. In other words, those most committed are those who plan to remain with an organization. Work patterns, particularly within leisure delivery systems, are often inconsistent with the longevity model. Leisure settings often rely less on full-time lifetime employees and more on contingent workers, those working part-time, seasonally or on a temporary basis. Consequently, much of the commitment literature offers limited insight to leisure managers. Further, research efforts within the commitment literature have, perhaps unnecessarily, focused their efforts on commitment to the organization. An emerging literature suggests that commitment may be focused on a variety of entities. This literature would benefit from a more expansive view of commitment and the entities to which it is directed. Traditional views of, and research in, workplace commitment may be inappropriate for contingent employees. Finally, the commitment literature is dominated by quantitative and questionnaire-based methodology (Cohen, 2003). This study is intended to address many of these issues by using qualitative methods to explore the ways in which various commitment types emerge among contingent employees in a variety of leisure settings. Consequently, this study examines the meaning of commitment to contingent employees in selected leisure services. It focuses on what these contingent employees felt most connected to in their specific workplaces; in essence their stories of what commitment meant to them. The study sample was composed of students enrolled in an undergraduate Recreation and Leisure Studies Program. In order to take part in the study, students were to have engaged in a series of short-term professional-related experiences. Initial contact with potential participants was through a short introduction in 2nd, 3rd and 4th yr recreation class. Six classes were used in this study with a total of 168 responses collected. Class members were asked if they would be willing to participate in a 60-90 minute interview to further discuss their work experiences. 24 participants took part in a semi-structured interview in which questions were asked about the intensity and focus of their commitment. It has been suggested that contingent employees may express little emotional commitment because of the limitations of their work experience (Chang & Chelladurai, 2000). However, in this study, the topic of passion or desire came up repeatedly during the interviews. For these contingent employees, commitment seemed very affective in nature. Their commitment was based strongly on enthusiasm and passion for various components of the work setting. There were many such components or foci raised by the participants. Consistent with Stinglhamber et al.’s (2002) multi-foci perspective of commitment, these individuals’ passion was typically directed to more than one entity. All five major foci of commitment (to the organization, supervisor, occupation, workgroup and client) helped build passion and commitment for these participants. While this is not uncommon, it is noteworthy that commitment to the organization (which dominates much of the private sector commitment literature) was prevalent in only two of the interviews. In each of these cases, however, it is unclear whether the organization or people within the organization engendered that commitment. While the individuals expressed support for the organization, their remarks seemed more directed at people in their respective organizations. Overall, those who revealed the greatest commitment (toward any foci) echoed the importance of intrinsic motivation; they must love what they were doing. Among these participants, there was little evidence of passionate commitment to any organization. Instead, the emphasis was more often on some specific element within the workplace. The focus of their attention was most prominent toward clients and toward supervisors. For these contingent workers affective commitment (as opposed to normative or continuance) dominated their thinking about commitment. They worked at the locations because they wanted to be there, not as a result of external constraints. They not only wanted to work in these settings, but they were passionate about their work. It was evident that either they brought that passion when they first arrived or developed a passion while on the job. Although one cannot generalize this finding to all contingent workers in all settings, there was little evidence of outright indifference among these workers. Finally, 2 new foci of commitment were identified. Specifically, participants introduced commitment or attachment to place, and commitment or involvement in activity as they discussed job-related commitment levels. These variables, while new to the management/commitment literature, have each received considerable research effort from within the leisure community. Overall, this study suggests that the dominant business-based commitment literature has largely failed to consider job conditions specific to the contingent leisure service employee. Further, research in leisure settings suggests that attachment can expand beyond the traditional foci (the organization, people, unions, etc.) to include the setting in which the work occurs and the activities around which the work happens. This suggests that traditionally leisure-based issues (place and activity) can bring much to the work setting and the commitment of those who toil in those settings. For managers of contingent workers, understanding the importance of place and activity in addition to traditional indicators of commitment may prove significant in helping develop a more committed contingent employee in the leisure service settings.