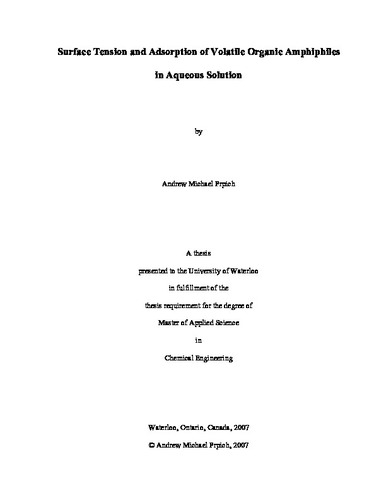 The surface tension of an interface separating two bulk phases is one of the most widely studied properties in surface science research. The importance of surface or interfacial tension is reflected in the diverse number of applications which are influenced by surface tension related effects. This thesis represents a comprehensive experimental and theoretical investigation on molecular adsorption and surface tension from a class of organic compounds in aqueous solutions. The research illustrates the effect of both liquid and vapor phase adsorption on the interfacial properties. Adsorption from both sides of the vapor/liquid interface is considered simultaneously rather than exclusive of one another, which has been the conventional practice. In the experimental study, the surface tension of a number of different volatile organic compounds is measured using the Axisymmetric Drop Shape Analysis-Profile (ADSA-P) method. The experiments were performed in a controlled environment under conditions where the surface tension can be affected by both vapor and liquid phase adsorption. The vapor phase was exerted by the presence of an environment solution containing the same organic component as in the drop solution. The results show that initially the surface tension is influenced by the organic concentration in both the liquid and the vapor phase. At the final steady-state the liquid phase becomes less important and the primary factor influencing the surface tension is the vapor phase concentration. The ADSA-P technique is verified by reproducing a select number of cases using the Wilhelmy plate method. A possible consequence of the surface tension phenomenon is illustrated through time-dependent contact angle experiments. The behavior of the interface at steady-state conditions is investigated by measuring the surface tension response to a change in drop volume. It is concluded that the organic compounds considered in the current study may represent a rather general group of molecules whose surface behavior is unique to that of many conventional surfactants. In the theoretical study an empirical model is proposed to describe the relation between the steady-state surface tension and the concentration of the environment and drop solutions. The results confirm the experimental observation that the final steady-state surface tension is determined primarily by the organic concentration in the vapor phase. In addition, a modified adsorption isotherm is developed to account for simultaneous adsorption from both sides of the vapor/liquid interface at steady-state conditions. The derivation is based upon the classic Langmuir analysis, and the new equation is consistent with the Langmuir isotherm under traditional conditions where adsorption occurs from one side of the interface. The modified isotherm is shown to be consistent with the experimental data and is used to generate the equilibrium parameters for three of the systems studied in this research. The adsorption isotherm is then extended to model the dynamic adsorption process through the creation of a new kinetic transfer equation. As with the adsorption isotherm, the transfer equation is based on Langmuir kinetics and is capable of simulating adsorption from both sides of the interface during surface equilibration. The kinetic transfer equation is validated against experimental data from two systems which exhibit a transfer-controlled adsorption mechanism. The theoretical predictions from the transfer equation fit well with the experimental data for both systems. However, significant variability is observed in the least squares estimates of the kinetic rate constants. The variability is attributed to the limitations of empirical models that utilize adjustable fitting parameters to optimize the model predictions, and the wide range of surfactant concentrations studied. Specific concentration regions are identified where the variability in the rate constants is minimal and thus, where the model is most appropriate.