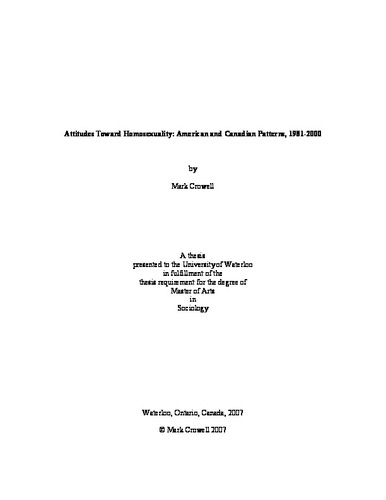 Previous research has determined that Canadians often exhibit more tolerant attitudes toward homosexuality than Americans, yet few studies have attempted to uncover why this pattern persists. Using World Values Surveys data, this study compares attitudes toward homosexuality between Canadians and Americans from 1981 to 2000. The study re-examines directly Reginald Bibby’s (2004) assertion that divergent levels of religious commitment, rather than other socio-demographic, cultural and socio-structural factors, largely account for attitudinal differences between the two neighbouring nations. Consistent with previous research, the findings suggest that differences in gender, marital status, age, education, home language, community size, region, and many indicators of religious involvement and religiosity assist in predicting attitudes toward homosexuality. Overall, the findings support Bibby’s theory that religious differences between Americans and Canadians largely explain more tolerant attitudes among Canadian citizens. Particular attention is also paid to factors outside of religion that may influence attitudes, but which are not directly observable in quantifiable data analysis.