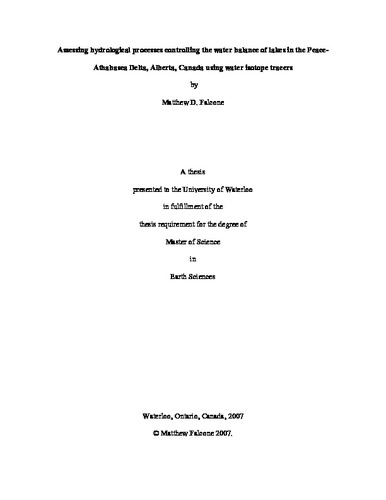 One of the world’s largest freshwater deltas (~4000 km2), the Peace-Athabasca Delta (PAD), is located at the convergence of the Peace and Athabasca rivers and Lake Athabasca in northern Alberta, Canada. Since the early 1970s, there has been increasing concern regarding the ecological impacts on the PAD after flow regulation of the Peace River began in 1968, decreased discharge in the Peace and Athabasca rivers as a result of hydroclimatic changes in Western Canada, and increased Athabasca River water usage by oil sands development to the south. This thesis is part of an ongoing, multi-disciplinary project assessing current and past hydrological and ecological conditions in the PAD. Research conducted in this thesis aims to better understand the processes controlling water balance of lakes in the PAD using mainly stable water isotope data collected from lakes and their input sources. Isotope data are used to describe and quantify hydrological processes for individual lakes (seasonal and annual) and across the delta and are supported by other chemical and hydrometric data. An isotopic framework in d18O-d2H-space is developed for the PAD using evaporation-flux-weighted local climate data, and isotopic data collected from a reference basin, lakes throughout the PAD, and lake input sources (i.e., snowmelt, rainfall, and river water). The framework is comprised of two reference lines, the Local Meteoric Water Line, which is based on measured isotopic composition of precipitation, and the Local Evaporation Line, which is based on modelled isotopic composition of reference points. Evaporation pan data is used to assess short-term variations in key isotopic reference values, which are important for addressing short-term changes in the isotopic signature of shallow basins. This framework is used in subsequent chapters including assessment of seasonal and annual water balance of two hydrologically-contrasting shallow lakes, and to quantify the impacts of flood water and snowmelt on a set of 45 lakes in spring 2003. Five years of isotope data using time-series analysis and the isotopic framework suggested that a perched (isolated) lake and its catchment (forest and bedrock) in the northern, relict Peace sector captured sufficient rain, snow, and runoff to maintain a relatively stable water balance, and also that a low-lying lake in the southern, active Athabasca sector was regularly replenished with river water in both spring and summer. Snowmelt and rainfall were found to have diluted the perched basin by an average of 16% and 28 % respectively, while spring and summer floods were found to almost completely flush the low-lying lake. Using the spring 2003 regional dataset, flooded lakes were separated from snowmelt-dominated lakes through use of suspended sediment concentrations, isotope data, and field observations. Application of an isotope mixing model translated d18O values into a range of replenishment amount by either river water or snowmelt, which compared well with hydrological conditions at the time of sampling and previously classified drainage types of the lakes. Spatial mapping of replenishment amounts illustrated flooding of much of the Athabasca sector due to ice-jams, except for two sub-regions isolated from flooding by artificial and natural northern diversion of flow from the Athabasca River. It is also shown that most of the relict landscape of the Peace sector was replenished by snowmelt except for a few low-lying lakes close to the Peace River and its tributaries. Overall, improved understanding of lake and regional hydrology in the PAD, especially the ability to quantify the affects of various lake inputs, will improve the ability to develop effective guidelines and management practices in the PAD as lakes respond to future changes in climate and river discharge.