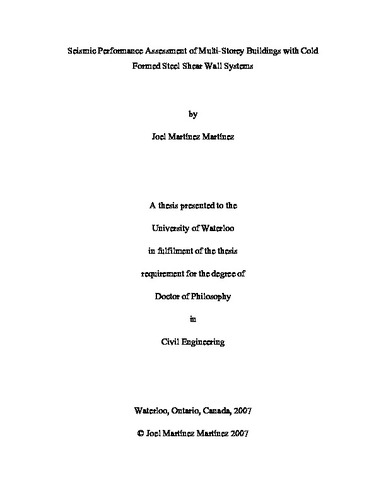 Cold-Formed Steel (CFS) is a material used in the fabrication of structural and non-structural elements for the construction of commercial and residential buildings. CFS exhibits several advantages over other construction materials such as wood, concrete and hot-rolled steel (structural steel). The outstanding advantages of CFS are its lower overall cost and non-combustibility. The steel industry has promoted CFS in recent decades, causing a notable increase in the usage of CFS in building construction. Yet, structural steel elements are still more highly preferred, due to the complex analysis and design procedures associated with CFS members. In addition, the seismic performance of CFS buildings and their elements is not well known. The primary objective of this study is to develop a method for the seismic assessment of the lateral-load resistant shear wall panel elements of CFS buildings. The Performance-Based Design (PBD) philosophy is adopted as the basis for conducting the seismic assessment of low- and mid-rise CFS buildings, having from one to seven storeys. Seismic standards have been developed to guide the design of buildings such that they do not collapse when subjected to specified design earthquakes. PBD provides the designer with options to choose the performance objectives to be satisfied by a building to achieve a satisfactory design. A performance objective involves the combination of an earthquake (i.e., seismic hazard) and a performance level (i.e., limit state) expected for the structure. The building capacity related to each performance level is compared with the demand imposed by the earthquake. If the earthquake demand is less than the building capacity, the structure is appropriately designed. The seismic performance of a CFS building is obtained using pushover analysis, a nonlinear method of seismic analysis. This study proposes a Simplified Finite Element Analysis (SFEA) method to carry out the nonlinear structural analysis. In this study, lateral drifts associated with four performance levels are employed as acceptance criteria for the PBD assessment of CFS buildings. The lateral drifts are determined from experimental data. In CFS buildings, one of the primary load-resistant elements is Shear Wall Panel (SWP). The SWP is constructed with vertically spaced and aligned C-shape CFS studs. The ends of the studs are screwed to the top and bottom tracks, and structural sheathing is installed on one or both sides of the wall. For the analysis of CFS buildings, Conventional Finite Element Analysis (CFEA) is typically adopted. However, CFEA is time consuming because of the large number of shell and frame elements required to model the SWP sheathing and studs. The SFEA proposed in this study consists of modeling each SWP in the building with an equivalent shell element of the same dimensions; that is, a complete SWP is modeled by a 16-node shell element. Thus, significantly fewer elements are required to model a building for SFEA compared to that required for CFEA, saving both time and resources. A model for the stiffness degradation of a SWP is developed as a function of the lateral strength of the SWP. The model characterizes the nonlinear behaviour of SWP under lateral loading, such that a realistic response of the building is achieved by the pushover analysis. The lateral strength of a SWP must be known before its seismic performance can be assessed. In current practice, the lateral strength of a SWP is primarily determined by experimental tests due to the lack of applicable analytical methods. In this investigation, an analytical method is developed for determining the ultimate lateral strength of SWP, and associated lateral displacement. The method takes into account the various factors that affect the behaviour and the strength of SWP, such as material properties, geometrical dimensions, and construction details. To illustrate the effectiveness and practical application of the proposed methodology for carrying out the PBD assessment of CFS buildings, several examples are presented. The responses predicted by the SFEA are compared with responses determined experimentally for isolated SWP. In addition, two building models are analyzed by SFEA, and the results are compared with those found by SAP2000 (2006). Lastly, the PBD assessment of two buildings is conducted using SFEA and pushover analysis accounting for the nonlinear behaviour of the SWP, to demonstrate the practicality of the proposed technology.