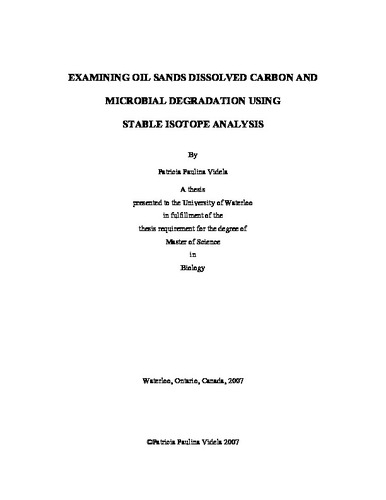 Oil sands mining operations in northeastern Alberta are rapidly expanding. Upgrading and extracting the bitumen from the sand requires large volumes of water generating large quantities of oil sands process water/materials (OSPM) which is high in organic content. Some of the major organic components found in OSPM include unrecovered bitumen, polycyclic aromatic compounds (PACs), naphthenic acids (NAs) and humic acids. Concerns of acute and chronic toxicity resulting from OSPM have led to provincial legislation preventing the discharge of OSPM into local water and mandating the reclamation of areas affected by oil sands mining. To date, OSPM is stored on lease in settling basins while the mining companies evaluate reclamation strategies. One of the reclamation strategies involves the use of wetlands constructed with differing amounts of OSPM and organic amendments such as peat. Currently, numerous wetlands, both natural and constructed, are present on oil sands leases. To determine the sustainability of these wetlands for reclamation, the assimilation and flow of carbon and nitrogen within the systems need to be defined. Stable isotope analysis can enhance this understanding. To effectively use stable isotopes in the field, there is the need to determine the changes in stable isotope values occurring from the microbial degradation of organic components such as NAs which contribute a significant portion to the dissolved organic carbon (DOC) in reclamation sites. This study examined the microbial degradation of commercial and oil sands derived NAs by oil sands derived microbial cultures. Changes in stable isotopes values in the biomass (δ13C, δ15N), DOC and dissolved inorganic carbon (DIC) (δ13C) arising from degradation of the DOC were tracked in both static and semi-continuous tests. Utilization of commercial and oil sands derived NAs resulted in minimal change of the DOC stable isotope values. The biomass was 13C enriched for both the commercial (0.3 to 2.9 per mil (‰)) and oil sands derived NAs (3.7 to 8.5 ‰) relative to the DOC stable isotope values. DIC stable isotope values showed higher variability (-5 to +5.5 ‰). The semi-continuous tests showed biomass that was 15N enriched (3.8 to 8.4 ‰) with the assimilation of ammonium. Isotope trends established in the laboratory study provide further understanding into assimilation of carbon and nitrogen compounds in the field. DOC and DIC concentration and carbon stable isotope values were determined for water sampled from 13 oil sands aquatic reclamation sites varying in age, construction and organic material. Both DOC and DIC concentrations were elevated in OSPM affected sites, by an average of 40 mg/L for DOC and 83 mg/L for DIC concentrations. DOC concentrations were also elevated by approximately 10 mg/L at high organic sites. δ13C DOC values were slightly 13C enriched in young sites: 0.6 ‰ compared to δ13C DOC values at the mature sites. Also, from June to July 13C enrichment (0.3 to 1.9 ‰) of the DOC for all sites was seen. Corresponding with the enrichment seen in the DOC, 13C depletion (-8.8 to -0.3 ‰) of the DIC was seen for most sites from June to July. The trends seen from June to July may be a result of the release of readily degradable organics from the spring thaw stimulating the microbial community. The baseline values determined for DOC and DIC may assist future field food web studies.