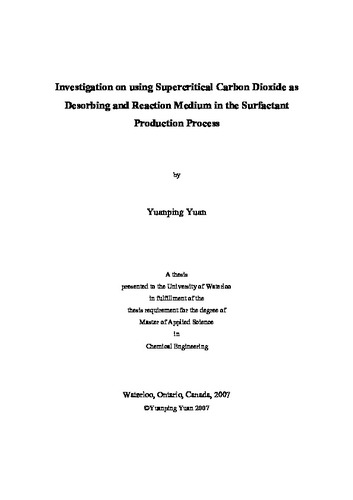 To date, an estimated 70% of energy consumed comes from fossil fuels, such as coal, oil and natural gas. The major source of sulfur dioxide (SO2) emissions comes from combustion of these fossil fuels. Sulfur dioxide is a significant pollutant, because it and its higher oxidation product (SO3) react with moisture in the atmosphere to produce sulfuric acid. This results in acid rain, which comes back to earth and affects people, animals, and vegetation. Therefore, the governments of Canada, US and European countries are issuing stricter and stricter regulation to control SO2 emissions. In conventional SO2 removal processes, lime or limestone scrubbers are used, but they require large amounts of water and enough landfill sites to deal with the solid wastes. Previous attempts were made in our laboratory to recover SO2 adsorbed on activated carbon to produce sulfuric acid using non-aqueous solvents. Unfortunately, in this adsorption/distillation process, the SO2 recovery was low, as was the quality of sulfuric acid, that could not be marketable. The topic of this thesis was then conceived as an attempt to first recover SO2 via SO3 formation using supercritical carbon dioxide instead of water or non-aqueous flushing agents (desorption step) and then to use the recovered SO3 to produce linear alkylbenzene sulfonates (LAS), the main component of detergent. In the adsorption and oxidation experiments of this project, charcoal activated carbon (AC) was used to adsorb SO2 and to catalyze SO2 oxidation. The process started with a simulated flue gas, 3500 ppm SO2, 5% O2, balanced with N2. When the simulated flue gas passed through the activated carbon bed reactor, more than 95% of SO2 was oxidized to SO3. In the desorption process, SO3 contacted with the AC bed was removed using supercritical carbon dioxide (SCCO2) and 95% sulfur removal was achieved at appropriate operating conditions, for example, for a carbon bed preheated at 250°C for 6 h, and flushed by recycled SCCO2. The LAS production experiments consisted in reacting liquid linear alkylbenzene (LAB) with the recovered SO3 in an absorption column. Ceramic filters and glass beads were used in the absorption columns to break up the gas bubbles and increase the contact time between the gas and the liquid absorbent. When staged pressure columns were used and when LAB was heated to 40°C, nearly 95% of SO3 reacted with LAB to produce LAS.