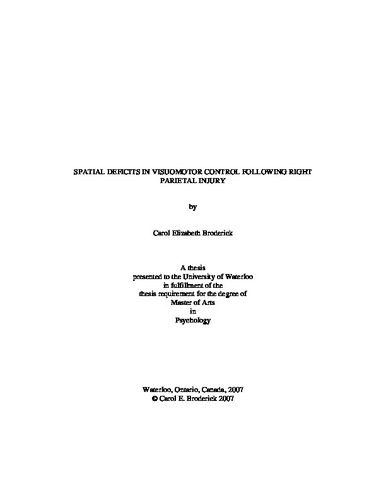 Superior parietal cortex has been implicated in visuomotor guidance and is proposed to be specialised for action in the lower visual field and peripersonal space. Two patients, one with a right superior parietal lesion leading to optic ataxia (ME), and one with a lesion affecting right inferior parietal cortex (LH), were compared to elderly controls (n=8) and young controls (n=8) on a reciprocal pointing task with movements made in the near-far direction (i.e., sagittal plane) or right-left direction (i.e., fronto-parallel plane). In contrast to both control groups, who demonstrated a speed-accuracy trade-off in movement time and peak velocity, neither of the patients did. When the time spent post-peak velocity (represented as a percentage of total movement time) was examined, both patients demonstrated larger times post-peak velocity than controls for all movement directions. Furthermore, while rightward movements of the right hand had higher times post-peak velocity than leftward movements there were no directional patterns for near-far movements which contrasted with controls who had larger times post-peak velocity for near movements. The patient with the more superior lesion (ME) had the greatest difficulty with movements made back toward the body suggestive of a role for superior parietal cortex in the fine tuning of movements made in this region of space (i.e., personal or peripersonal space). In contrast, all directions of movement seemed to be equally affected in the patient with a more inferior lesion. These results are discussed in terms of the different roles played by inferior and superior parietal cortex in the control of visually guided movements.