Influence of Sulphide on the Degradation Pathways for Chlorinated Ethenes 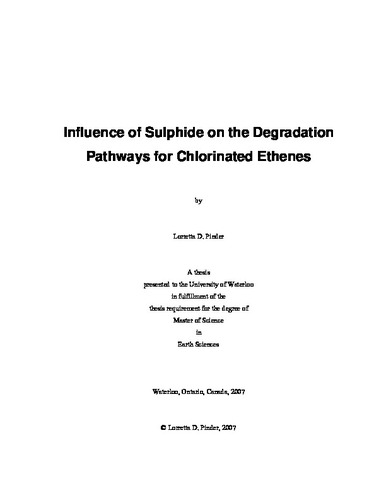 Although iron-based permeable reactive barriers are gaining importance in the treatment of groundwater contaminants, there have been field observations indicating that sulphide may affect the degradation rates of certain chlorinated ethenes. Previous observations suggest that sulphide has little effect on TCE degradation rates but can cause a significant decline in the rate of degradation of cis-DCE. This study was conducted to systematically test the effects of S2- on TCE, cis-DCE, trans-DCE, 1,1-DCE and VC. Two different concentrations of sulphide (5 and 50 mg/L) were used in the column experiments. The results showed that the rate of TCE degradation was only slightly reduce in the presence of sulphide, while there was substantial reduction in the rates of degradation of cis-DCE, 1,1-DCE and VC. Trans-DCE was affected by sulphide, however, not as severely as cis-DCE, 1,1-DCE and VC. Raman Spectra showed the presence of a small amount of sulphide precipitates, and corrosion potential measurements showed that sulphide shifted the corrosion potential of the iron to less negative values by approximately 70 mV, suggesting that the change in corrosion potential was not responsible for the preferential degradation of TCE relative cis-DCE and VC. The dominant pathway for TCE degradation is β-elimination, while that for cis-DCE and VC is generally considered to be hydrogenolysis, though there is also evidence in the literature indicating that cis-DCE and VC can also degrade by catalytic hydrogenation. The results indicate that sulphide does not inhibit β-elimination but severely limits the hydrogenolysis/catalytic hydrogenation pathway. The fact that sulphide inhibited the conversion of ethene to ethane, a known catalytic reaction, indicated that sulphide is acting as a catalyst poison. It is therefore concluded that the primary mechanism for the transformation of cis-DCE to VC and for VC to ethene is catalytic hydrogenation, and that sulphide inhibits these transformations through its role as a catalyst poison.