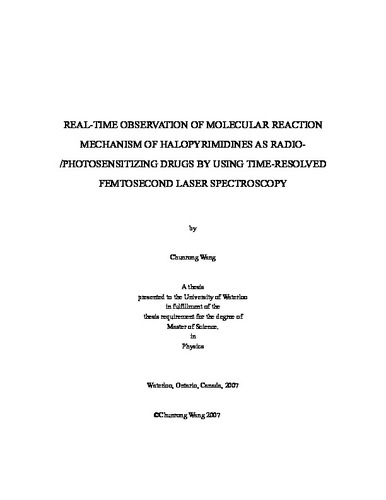 Replacement of thymidine in DNA by halopyrimidines, such as bromodeoxyuridine (BrdU) and iododeoxyuridine (IdU), has long been known to enhance DNA damage and cell death induced by ionizing/UV radiation, but the mechanism of action of halopyrimidines at the molecular level is poorly understood. We have applied advanced time-resolved femtosecond laser spectroscopy to this molecular system of biological, chemical and medical significance. We obtained the first real-time observations of the transition states of the ultrafast electron transfer (UET) reactions of halopyrimidines with the ultrashort-lived precursor to the hydrated electron, which is a general product in ionizing/UV radiation. Our results provide a mechanistic understanding of these photo-/radiosensitizing drugs at the molecular level. We found that the UET reaction of BrdU is completed within 0.2 picosecond (ps) after the electronic exciataion, leading to the formation of the transition state BrdU* with a lifetime of ~1.5 ps that then dissociates into Br and a high reactive radical dU•. We have also demonstrated that the reaction efficiency for the formation of the reactive radical dU• to cause DNA damage and cell death is in the order of IdU>>BrdU>CldU>>FdU. This is due to the availability of two precursor states of ~0.2 ps and ~ 0.54 ps lifetimes for dissociative electron attachment (DEA) to IdU, of one precursor state of ~0.2 ps lifetime for DEAs to BrdU and CldU, and no precursors for DEA to FdU. This explains why BrdU and IdU were found to be effective radio-/photosensitizers and indicates that IdU should be explored as the most effective radiosensitizer among halopyrimidines. Moreover, as a by-product of this project, these halopyrimidines have been employed as quantum-state-specific molecular probes to resolve a long-standing controversy about the nature and lifetimes of prehydrated electrons. These findings also have a broader significance as they indicated that nonequilibrium precursor electrons may play an important role in electron-initiated reactions in many biological, chemical and environmental systems. We have also demonstrated UET reactions of nucleotides with the precursor to the hydrated electrons. Our results indicate that among DNA bases, adenine is the most efficient electron trapper and an effective electron transfer promoter, while guanine is the most effective in dissociative electron attachment. These results not only primarily explain the sequence selectivity of duplex DNA containing BrdU/IdU, but imply that the DEA of guanine is an important mechanism for radiation-induced DNA damage in ionizing radiation and radiotherapy of cancer.