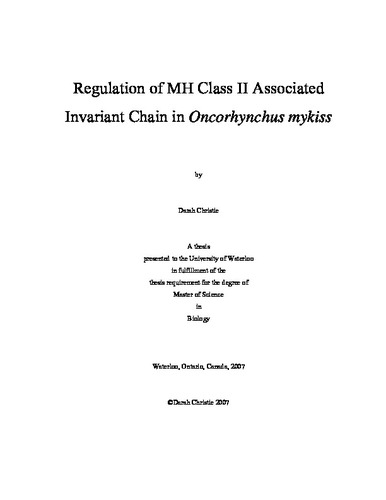 Major histocompatibility complex (MHC) class II associated invariant chain is a chaperone of the mammalian MHC class II antigen presentation pathway. It is responsible for targeting the MHC class II dimer to the endocytic pathway, which allows for the loading of exogenous antigens onto the MHC class II receptor. Two genes showing significant sequence similarity to the mammalian invariant chain gene have been identified in rainbow trout. S25-7 and INVX are thought to play a role within the teleost MH class II antigen presentation pathway similar to that performed by the mammalian invariant chain. In vivo and in vitro methods have been used to investigate the regulation of these genes upon immune system activation. To induce an immune response both rainbow trout and the macrophage-like cell line RTS-11 were treated with phorbol myristate acetate (PMA). PMA is a stimulator of protein kinase C, which is involved in the activation of both B and T cells. After PMA treatment, individuals were sacrificed at several time points and tissues were collected for analysis. Up-regulation of IL-1β transcript, as detected by RT-PCR analysis, demonstrated the successful induction of an immune response in vivo. S25-7 transcript levels remained unchanged in gill, spleen, peripheral blood leukocytes and liver. However, the transcript was found to be significantly decreased in head kidney beginning 24 hours post-stimulation. INVX transcript levels remained unchanged in all tissues analyzed. In addition, the level of S25-7 transcript is higher in all tissues than INVX transcript. Western blot analysis detected both S25-7 and INVX proteins within gill and spleen, indicating the presence of cell populations capable of presenting extracellular antigen within the MH class II dimer. Similar to transcript analysis, the level of invariant chain in these tissues remained unchanged during immune system activation. Neither INVX nor S25-7 was detected in head kidney, indicating this tissue may not function as a secondary immune tissue, as previously thought. Finally, western blot analysis failed to detect either INVX or S25-7 protein within liver, as expected in a non-immune tissue. RTS11 analysis demonstrated a similar pattern of invariant chain expression in vitro. S25-7 transcript levels remained stable throughout the PMA stimulation time course, while INVX transcript was down-regulated at 48 and 96 hours post-stimulation, with a subsequent increase at 168 hours. However, both S25-7 and INVX protein levels remained unchanged during immune stimulation. These results demonstrate a pattern of invariant chain tissue expression, providing information about the type of immune functions carried out at these sites. In addition, the results indicate that neither INVX nor S25-7 is up-regulated, at either the transcript or protein level upon immune system activation. This is in contrast to the mammalian invariant chain, which is up-regulated at both the transcript and protein level during an immune response, indicating that teleosts have evolved a unique system of immune regulation.