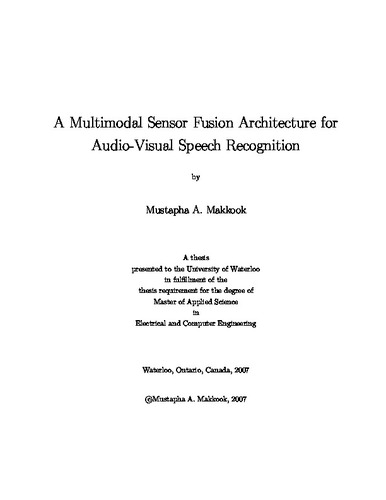 A key requirement for developing any innovative system in a computing environment is to integrate a sufficiently friendly interface with the average end user. Accurate design of such a user-centered interface, however, means more than just the ergonomics of the panels and displays. It also requires that designers precisely define what information to use and how, where, and when to use it. Recent advances in user-centered design of computing systems have suggested that multimodal integration can provide different types and levels of intelligence to the user interface. The work of this thesis aims at improving speech recognition-based interfaces by making use of the visual modality conveyed by the movements of the lips. Designing a good visual front end is a major part of this framework. For this purpose, this work derives the optical flow fields for consecutive frames of people speaking. Independent Component Analysis (ICA) is then used to derive basis flow fields. The coefficients of these basis fields comprise the visual features of interest. It is shown that using ICA on optical flow fields yields better classification results than the traditional approaches based on Principal Component Analysis (PCA). In fact, ICA can capture higher order statistics that are needed to understand the motion of the mouth. This is due to the fact that lips movement is complex in its nature, as it involves large image velocities, self occlusion (due to the appearance and disappearance of the teeth) and a lot of non-rigidity. Another issue that is of great interest to audio-visual speech recognition systems designers is the integration (fusion) of the audio and visual information into an automatic speech recognizer. For this purpose, a reliability-driven sensor fusion scheme is developed. A statistical approach is developed to account for the dynamic changes in reliability. This is done in two steps. The first step derives suitable statistical reliability measures for the individual information streams. These measures are based on the dispersion of the N-best hypotheses of the individual stream classifiers. The second step finds an optimal mapping between the reliability measures and the stream weights that maximizes the conditional likelihood. For this purpose, genetic algorithms are used. The addressed issues are challenging problems and are substantial for developing an audio-visual speech recognition framework that can maximize the information gather about the words uttered and minimize the impact of noise.