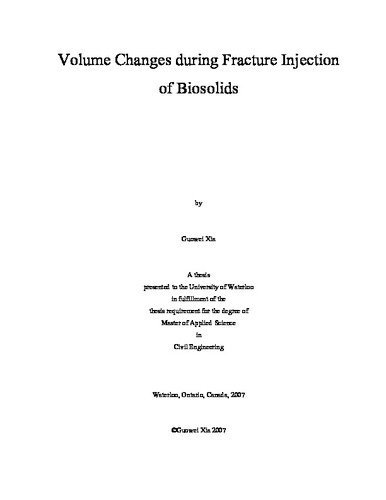 The term biosolids refers to the nutrient-rich organic materials resulting from the treatment of domestic sewage at a wastewater treatment facility. It is a widely acceptable term for sewage sludge that has been treated at a wastewater treatment plant and is beneficially recycled. Biosolids inherently come from sewage sludge, so they have the same origin and biological nature, but a different applicability. The quantity of municipal biosolids produced increases annually in the United States. The production of biosolids has increased because of both the advance of sanitation and wastewater treatment and the growth of population. Sludge or biosolids are contaminated by varying amounts of heavy metals or hazardous organic compounds from industrial and commercial wastewater. Therefore, society has to face the potential for increased negative impacts on the environment from the increasing volume of biosolids being produced. Public concerns about applied biosolids treatment or reuse methods are potential health, environmental, or aesthetic impacts (such things as disease, odors), because of the pollutants in the biosolids. The most commonly used methods for biosolids treatment and recycling are briefly reviewed in the first two chapters of this thesis. However, the current biosolids treatment or recycling options have their own defects. A new and innovative technology, deep biosolids injection, is proposed for the treatment of biosolids and is to be implemented by Los Angeles where the City has been granted underground solids injection control permits under Class V wells by the US Environmental Protection Agency. Deep biosolids injection is a process referred to as one type of several deep underground injection techniques. It shares many similarities with slurried solids injection above the fracture pressure, which has been successfully used for the treatment of slurried non-hazardous solid materials produced in the oil industry such as drill cuttings, viscous emulsions with clay, oily sand, NORMs (naturally occurring radioactive materials), pipe scale, tank bottoms, soil from spill clean-up, and so on. The distinctive biosolids properties result in injection mechanisms different from other slurry injection processes. Filtration and consolidation processes occur simultaneously along with injection of biosolids, and these must be understood in order to properly design and manage a biosolids injection operation. Hydraulic fracture mechanisms, filtration theory and consolidation principles provide the basis for the interpretation of biosolids injection process. A semi-analytical hydraulic fracture model for injection of a compressible substance (biosolids) is developed as a modification of the Perkins-Kern-Nordgren (PKN) hydraulic fracture model. The PKN model is modified with a pseudo-dynamic leak-off function that describes the deposition of biosolids (filtration) and plugging effect of biosolids on the fracture wall in a porous medium. The pseudo-dynamic leak-off function is given in terms of the net pressure and the resistance of the filter cake to flow. The hydraulic fracture model is employed to compute the volume of biosolids slurry remaining in an open induced fracture. The consolidation process in the closure phase of deep biosolids injection is described using the biosolids properties under different stress conditions. A Terzaghi-type relationship is used to compute the volume change in the closure phase using compressibility data available from published literature. In contrast to the conventional PKN leak-off model, simulation results using the new model show that the induced fracture volume is much larger because of the impaired leak-off and because of the volumetric effects and consolidation of the biosolids in the fracture. Solids contents and biosolids compaction behavior have significant impacts on the geometry of fracture (width, length, volume) over time. The model was developed to help guide large-scale injection of municipal and animal biosolids as an environmentally more secure method of treatment than surface approaches.