An Ordered Bag Semantics for SQL 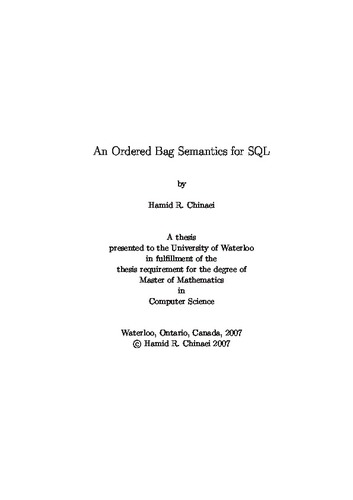 Semantic query optimization is an important issue in many contexts of databases including information integration, view maintenance and data warehousing and can substantially improve performance, especially in today's database systems which contain gigabytes of data. A crucial issue in semantic query optimization is query containment. Several papers have dealt with the problem of conjunctive query containment. In particular, some of the literature admits SQL like query languages with aggregate operations such as sum/count. Moreover, since real SQL requires a richer semantics than set semantics, there has been work on bag-semantics for SQL, essentially by introducing an interpreted column. One important technique for reasoning about query containment in the context of bag semantics is to translate the queries to alternatives using aggregate functions and assuming set semantics. Furthermore, in SQL, order by is the operator by which the results are sorted based on certain attributes and, clearly, ordering is an important issue in query optimization. As such, there has been work done in support of ordering based on the application of the domain. However, a final step is required in order to introduce a rich semantics in support. In this work, we integrate set and bag semantics to be able to reason about real SQL queries. We demonstrate an ordered bag semantics for SQL using a relational algebra with aggregates. We define a set algebra with various expressions of interest, then define syntax and semantics for bag algebra, and finally extend these definitions to ordered bags. This is done by adding a pair of additional interpreted columns to computed relations in which the first column is used in the standard fashion to capture duplicate tuples in query results, and the second adds an ordering priority to the output. We show that the relational algebra with aggregates can be used to compute these interpreted columns with sufficient flexibility to work as a semantics for standard SQL queries, which are allowed to include order by and duplicate preserving select clauses. The reduction of a workable ordered bag semantics for SQL to the relational algebra with aggregates - as we have developed it - can enable existing query containment theory to be applied in practical query containment.