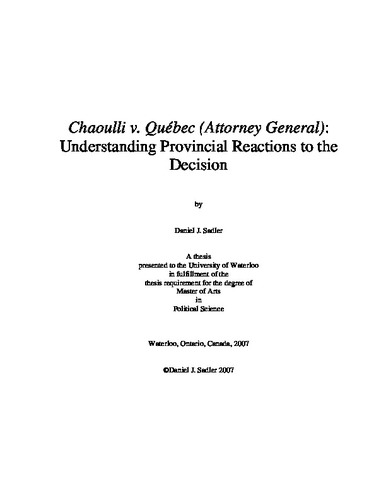 This thesis focuses on provincial reactions to the Supreme Court decision on 5 June 2005, Chaoulli v. Quebec (Attorney General). In this decision, the Court struck down the government of Québec’s ban on private insurance for publicly-insured services, on the grounds it violated the Québec Charter of Human Rights and Freedoms, while the decision on the Canadian Charter ended in a 3:3 tie with one abstention. It is the purpose of this research to examine the reactions of each provincial government to the decision in an attempt to understand why each province responded in its chosen manner. In order to make this determination, four hypotheses were constructed in order to test four separate variables: court interference, current law, ideology, and political calculation. These hypotheses were tested against provincial reactions in the media, legislatures, court documents, and E-mail administered questionnaires. This research finds that each hypothesis had some success in predicting provincial reactions to the decision, with a government’s current law and ideology proving to be the most accurate predictors. Based on the evidence gathered, three conclusions were arrived at: first, a government’s law and its ideology will often predict how a government will behave; second, that governments are open to Supreme Court decisions in the area of health care, and, finally, that if provincial governments were to make the decision to increase the role of the private sector in health care, political leaders would require public opinion be in support of such a decision rather than act solely on an ideological predisposition to greater private sector involvement.