The Source of the Positivity Bias in Older Adults' Emotional Memory 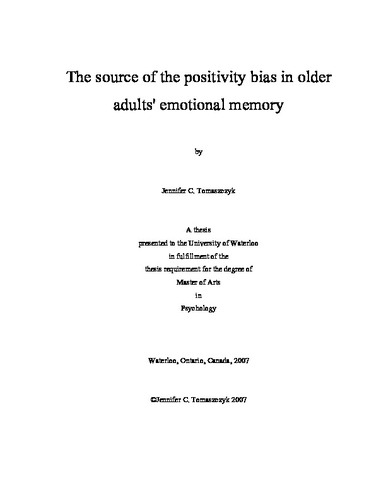 According to socioemotional selectivity theory (SST), old age is associated with a greater emphasis on self-regulation of emotional states, a focus that fosters a bias in processing positively valenced material in older adults. There is disagreement, however, about whether the “positivity bias” suggested by SST influences performance on memory tasks. Some studies suggest that older adults remember more positive than negative information, or simply less negative information, relative to younger adults, whereas other studies report no such differences. This thesis examined (1) whether variations across studies in encoding instructions or in personal relevance of study materials could account for these inconsistencies, and (2) whether differences in attention at encoding to positive, negative, and neutral stimuli could account for the positivity bias in older adults’ later memory for the stimuli. In Experiment 1, younger and older adults were instructed either to passively view positive, negative, and neutral pictures or to actively categorize them by valence. On a subsequent incidental recall test, older adults recalled equal numbers of positive and negative pictures, whereas younger adults recalled negative pictures best. There was no effect of encoding instructions. Crucially, when pictures were grouped into high and low personal relevance according to participants’ ratings, a positivity bias emerged only for low relevance pictures. In Experiment 2, attention to pictures at encoding was directly manipulated through use of a divided attention paradigm. Although divided attention lowered recall in both age groups, attention did not interact with age and valence. Taken together, the results suggest that variability in the personal relevance of study pictures may be the factor underlying cross-study differences in whether a positivity bias is observed in older adults’ memory.