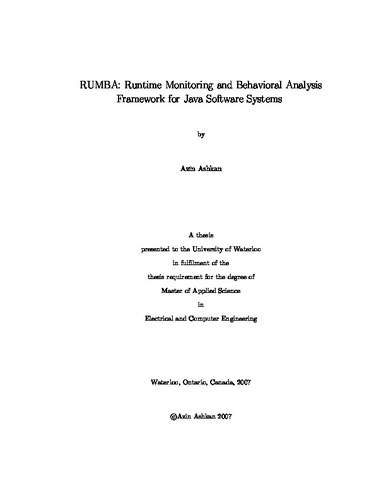 A goal of runtime monitoring is to observe software execution to determine whether it complies with its intended behavior. Monitoring allows one to analyze and recover from detected faults, providing prevention activities against catastrophic failure. Although runtime monitoring has been in use for so many years, there is renewed interest in its application largely because of the increasing complexity and ubiquitous nature of software systems. To address such a demand for runtime monitoring and behavioral analysis of software systems, we present RUMBA framework. It utilizes a synergy between static and dynamic analyses to evaluate whether a program behavior complies with specified properties during its execution. The framework is comprised of three steps, namely: i) Extracting Architecture where reverse engineering techniques are used to extract two meta-models of a Java system by utilizing UML-compliant and graph representations of the system model, ii) Seeding Objectives in which information required for filtering runtime events is obtained based on properties that are defined in OCL (Object Constraint Language) as specifications for the behavioral analysis, and iii) Runtime Monitoring and Analysis where behavior of the system is monitored according to the output of the previous stages, and then is analyzed based on the objective properties. The first and the second stages are static while the third one is dynamic. A prototype of our framework has been developed in Java programming language. We have performed a set of empirical studies on the proposed framework to assess the techniques introduced in this thesis. We have also evaluated the efficiency of the RUMBA framework in terms of processor and memory utilization for the case study applications.