University, Downtown, and the Mid-size City: An Examination of the Roles of University in Downtown Revitalization within the Context of Community-University Partnerships 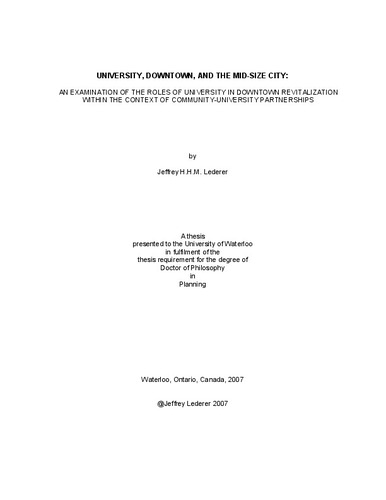 Planning practitioners and academics continually search for ways to help revive ailing downtowns and to better understand the factors that influence the success or failures of downtown revitalization. Most of the literature dealing with such revitalization attempts focuses on either larger urban areas or small rural municipalities -- much of it is based on anecdotal evidence drawn from a very limited number of observations (Filion, et al. 2004; Gratz and Mintz, 1998; Leinberger, 2005; Robertson, 1995, 1999). For the most part, downtown revitalization strategies have focused on either physical or functional improvements. For the mid-size city (population between 50,000 to 500,000), the need for new remedies grounded in an understanding of their present day downtown challenges, is becoming increasingly evident. Recent studies have observed that those mid-size cities ranked as having successful or very successful downtowns all shared distinctive attributes such as high levels of pedestrian activity; a strong tourist or visitor appeal; a well-preserved historical district; attractive natural features such as waterfronts; and the presence of a university in the downtown (Bunting et al. 1999; Filion et al., 2004; Lederer and Seasons, 2005). This dissertation focuses one such factor – the presence of a university. It examines the university role(s) in downtown revitalization and collaborative partnerships between community and university. Collaborative planning theory was used to help conceptualize this research by providing further insights into the dynamics, nature, and roles of these “town-gown” partnerships. Community-university partnerships continue to grow and appear to be helping meet the challenges and complexity of downtown planning issues. However, little empirical research is available on the role of universities in downtown revitalization initiatives, especially in mid-size cities. Using a conceptual framework that included a literature review, field trips, a web-based questionnaire survey, and telephone interviews, information was collected about mid-size city downtowns, roles of universities, university and downtown revitalization, and community-university partnerships. Given the review of the available literature and the information provided by surveyed respondents, universities appear to be playing an important role in downtown revitalization primarily through economic development and human capital investment. The ability for partners to engage more freely in a mid-size city is apparent because they are more readily known and available to each other unlike their counterparts in larger urban centres. Strong leadership, relationship building, accessibility, and open lines of communication limit issues of mistrust and alienation amongst partners. Collaborative planning theory (Healey, 1997, 2003) helped illustrate the importance of mutual learning and relationship building to members who have or are involved with a community-university partnership. Although the roles of partners varied, the weight placed on such roles must be considered as of equal value. The planning process in building vision, capacity building, and negotiating outcomes can be led by community and facilitated by university partners – two very different roles yet weighted equally. The research also suggests that the use of collaborative planning for downtowns is appropriate in settings where collective action is necessary to help provide resources toward revitalizing ailing downtowns. Planners, therefore, must handle a number of roles: listening, educating, facilitating, mediating, advocating, communicating, and organizing. For the university, service learning also plays an important role in educating and developing community -- especially in downtown revitalization. It challenges universities to broaden their missions towards becoming “engaged” campuses supporting not only what is important to them within their own domain but outside as well (i.e. their host community). However, the degree of collaborative effort with universities (i.e. faculty, staff, and students) is dependent on an institution’s culture and its level of support for community engagement and outreach. This research provides new insights into the collaborative nature of the community and university partnership. The knowledge gained from this research provides further understanding of the implications for planning by informing planners and policy-makers about how these partnerships can facilitate downtown revitalization.

Jeffrey Lederer (2007). University, Downtown, and the Mid-size City: An Examination of the Roles of University in Downtown Revitalization within the Context of Community-University Partnerships. UWSpace. http://hdl.handle.net/10012/3039