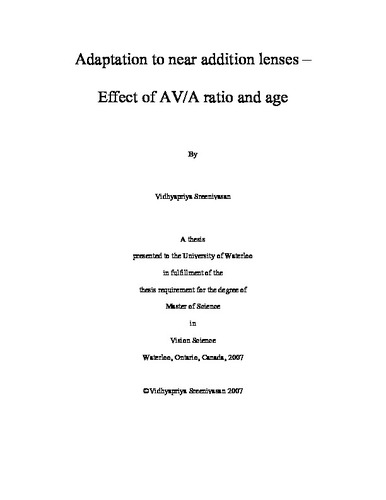 AIM: The primary purpose of this thesis was to evaluate the pattern of changes to accommodation and phoria when pre-presbyopic individuals perform near work for 20 minutes with +2D lenses. In addition, the thesis also investigates the effect of the accommodative vergence cross-link (AV/A) and age on binocular adaptation to addition lenses. METHODS: Accommodation was measured using the PowerRefractor (Multichannel Systems, Germany) and phoria was measured using the modified Thorington Technique. Twenty four pre-presbyopic and emmetropic individuals (11 adults and 13 children) participated in the study. All participants fixated a near target at a distance of 33 cm for 20 minutes with +2D (lens condition) and without (no lens condition) +2D addition lenses. Binocular and monocular changes in accommodation and near phoria were measured at the outset and at 3, 6, 9, 15 and 20 minute intervals. RESULTS: Effect of +2D lenses on accommodation and phoria: The emmetropic adult participants exhibited lag of accommodation under the no lens condition (binocular: 0.51 ± 0.12D; monocular: 0.64 ± 0.15D) that were eliminated (under monocular viewing) and reversed (exceeded demand by 0.51 ± 0.11 D under binocular viewing condition) with the addition of +2D lenses. The near phoria showed a significant increase towards exophoria by 6 ± 0.56 ∆D upon introduction of +2D lenses. Sustained near viewing with +2 D lenses resulted in significant reduction of the binocular focus alone (not monocular focus) after 3 minutes of binocular viewing (magnitude of reduction: 0.24D; P<0.01). The exophoria also showed a concomitant reduction after 3 minutes of fixation at the near task (Magnitude of reduction: 3.6 ± 0.6 ∆D; P<0.001). The magnitude and rate of vergence adaptation, determined using an exponential function, was found to be 4.6 ± 0.21 ∆D and 2.12 minutes respectively for the emmetropic adult participants. Effect of age on vergence adaptation: A pattern of significant reduction in phoria and binocular focus similar to the adult participants was observed in young children. Analysis of the vergence adaptation curves in the two age groups did not show any significant difference in both the magnitude as well as the rate of phoria adaptation within the age range tested (Magnitude of adaptation - Adults: 4.65 ∆D; Children: 4.51 ∆D; P > 0.05; Time constants -Adults: 2.12 minutes: Children: 1.53 minutes, P > 0.05). Effect of AV/A ratio on vergence adaptation: The stimulus (St-AV/A) and the response AV/A (R-AV/A) ratios were determined and the participants were divided into two groups (low and high AV/A ratio) under both the conditions. The result indicated that, under both testing conditions (stimulus and response AV/A), the individuals with higher AV/A ratios demonstrated greater magnitudes of vergence adaptation than those individuals with lower ratios (Magnitude of adaptation: Low St-AV/A = 4.12 ∆D; Low R-AV/A= 4.25∆D; High St-AV/A = 4.88 ∆D; High R-AV/A = 4.65∆D; P<0.05) CONCLUSIONS: Introduction of near addition lenses initiated an increase in exophoria and convergence driven accommodation. Vergence adaptation occurred after 3 minutes of binocular viewing thus reducing exophoria and convergence driven accommodation. The magnitude and completeness of phoria adaptation were seen to depend on an individuals AV/A ratio with greater magnitude and incomplete adaptation observed in participants with higher AV/A ratios. Age, within the limits of the study did not appear to influence phoria adaptation with near addition lenses.