Image versus Position: Canada as a Potential Destination for Mainland Chinese 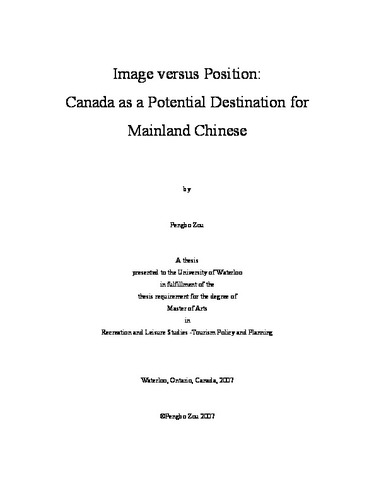 The potential of the Chinese outbound tourism market is substantial; however, research on this market to Canada is limited. This may be due, in part, to the lack of Approved Destination Status (ADS). This study examined the possible perceived image of Canada obtained by potential Chinese tourists, and to compare to the marketing position of Canada by CTC China Division-in effect, to conduct a product-market match between two concepts. Content analysis and an importance and performance analysis were used in the study. A questionnaire distributed at the Beijing Capital International Airport solicited perceptions of tourism in Canada, importance of selected attributes in travel decision making, performance of selected attributes on Canada, and trip preferences. The marketing position of Canada was examined through a content analysis of the promotional materials circulated from CTC China Division in Beijing, China. The coherences and gaps between perceived image of Canada and marketing position of Canada provide some marketing implications. This study concludes that the general tourism image of Canada is vague but positive, which is probably derived from the historically favorable image of Canada in china. Potential Chinese tourists had little knowledge on specific tourism sights; however, they recognized star attractions of Vancouver, Niagara Falls, and Toronto. Potential Chinese tourists prefer slow-paced trips; group tours; two weeks in length; in fall season; featuring mid-budget accommodation, preferably bed-and-breakfasts; on motor coach; visiting nature based sights at majority; and providing foods of various cultures. The current marketing position of Canada reflected through promotional materials by CTC and its partners has coherences in promoting tourism attractions in Canada to the image of Canada. Gaps exist on the promotion of travel issues and unconventional attractions, which inspires the marketing implications. Promotional resources should be allocate to unconventional tourism attractions with consideration rather than the presence of Chinese and mandarin speaking environment in Canada because of Chinese tourists’ demand for culture diversity. Promotion should include more information about travel expense and visas to establish reasonable consumer expectations.