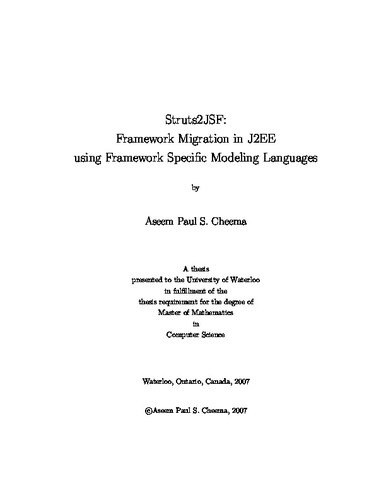 Java 2 Enterprise Edition is a portable, robust, scalable and secure platform for enterprise software development based on Java technologies, and embraces open standards through the Java Community Process (JCP). J2EE development is not very productive because of the complexity of the platform and the lack of good tool support. Object-Oriented Frame- works are a reliable design and code reuse approach. Many frameworks have emerged since J2EE’s release to ease development. Struts has become the de-facto standard, while JavaServer Faces (JSF) is a new framework, which has been included in the J2EE spec- ification and hence standardized. Both Struts and JSF frameworks are based on Model- View-Controller design pattern. JSF takes a similar approach to Struts for the controller component, but adds to it by providing user interface components with server-side state for the view component. This work deals with the problem of migrating an application based on the Struts frame- work to the new JSF framework. The software migration task is divided into view and con- troller migration. Controller migration is semi-automated using Antkiewicz’s Framework- Specific Modeling Languages (FSML) approach. Guidelines are provided for view migra- tion, which boils down to the problem of componentization. JSF and Struts frameworks can also be used together where JSF supports the view component while Struts supports the controller component. Merits and demerits of this approach are also discussed.