Roman Catholic Women Religious and Organizational Reform in English Canada: The Ursuline and Holy Names Sisters in the Diocese of London, Ontario, 1950-1970 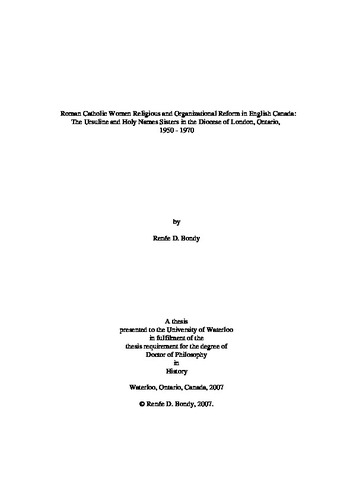 Adding to a growing body of research on women and religion in English Canada, this historical study offers a glimpse inside convent culture in 1950s and ’60s Ontario, an area seldom studied by Canadian historians. The oral histories of two teaching communities in the Diocese of London, Ontario - the Ursuline Sisters of the Chatham Union and the Ontario Province of the Sisters of the Holy Names of Jesus and Mary - as well as textual records from their convent archives, form the basis of this study. This thesis seeks to examine both the external and internal factors which precipitated reforms to convent life during the 1950s and 1960s, that is, the years preceding and immediately surrounding the Second Vatican Council of the Roman Catholic Church. The external factors on reform include the pre-conciliar and conciliar mandates of the institutional Church, as well as social factors such as educational reform and changes in the roles of women throughout the postwar period. The more internal factors affecting change include shifts in sisters’ communal and individual identities and changes in spirituality. Taken together, these catalysts of change are reflective of the interplay of religious belief, institutional power and gender in postwar Canadian Roman Catholicism. Analyses of Church mandates, community responses, convent discourses on girls and women, and the spiritual reading practices of sisters throughout this period of significant change reveal that the reform efforts of religious communities were not only official and prescribed, but were also unofficial and grassroots in nature.