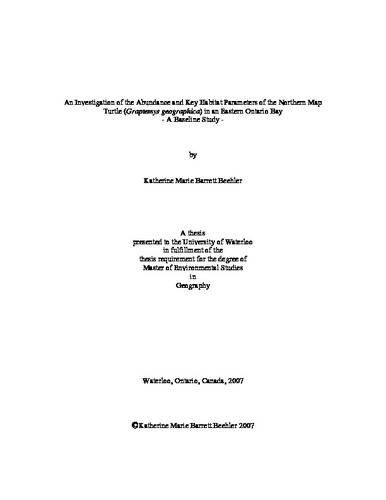 This study assessed the principles of ecosystem management and utilized the Northern Map turtle, a species at risk, as a key indicator species to illustrate the importance of preserving riparian habitats and island complexes on an ecosystem scale. Overall, the study explored the population characteristics and use of habitat of the Northern Map turtle (Graptemys geographica) within a small bay within the Gananoque River system in South Eastern Ontario. Results from field observations showed that the bay population of Northern Map turtles appeared to be female biased. Use of habitat features differed by females, males and juveniles at different times throughout the summer (May-August). Females were frequently observed basking within the bay in May and June while males were more frequently observed throughout July and August. Nesting by female Northern Map turtles appeared to be concentrated atop small islands scattered throughout the bay. Nest sites were located within narrow bands of soils. The most prominent difference between site conditions at the monitored nests was soil moisture; this was likely the result of different soil materials at each site. Air and soil temperature did not differ significantly between sites. Additional research could be pursued on the bay population of Northern Map turtles looking at the following: movement patterns by females out of the bay post-nesting, genetic linkages to other satellite populations of Northern Map turtles in the Thousand Islands, hatchling success and sex composition, overall species health due to food availability and lastly the effects of anthropogenic stressors.

Katherine Marie Barrett Beehler (2007). An Investigation of the Abundance and Key Habitat Parameters of the Northern Map Turtle (Graptemys geographica) in an Eastern Ontario Bay - A Baseline Study. UWSpace. http://hdl.handle.net/10012/3027