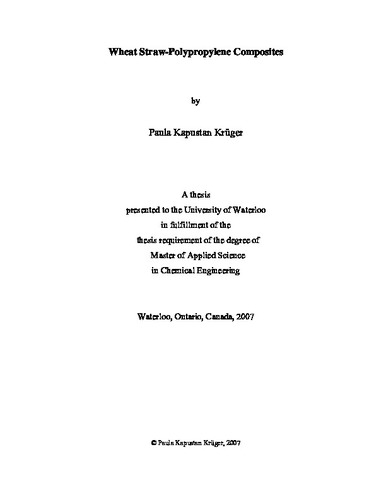 Composites are combinations of mainly two different components: the matrix and the filler/reinforcement. In the thermoplastic composites industry, natural fibers from agricultural crops have been emerged as alternative fillers. Crops such as wheat straw are renewable and low cost materials that, combined with thermoplastics such as polypropylene, provide engineering products with unique characteristics. The objective of this study was to investigate the influence of processing conditions and composite formulation in the final properties of the composites. For these purposes wheat straw fibres and polypropylene (PP) were compounded in a batch mixer under a number of different thermal conditions and formulations. Fiber loading in the range from 0 to 60 wt-% was examined and the individual effects of two coupling agents (maleic anhydride modified polypropylene and maleic acid ethylene copolymer) and a lubricant were also studied. Particle size, morphology, thermal and mechanical properties and water uptake behaviour were inspected with appropriate techniques. Wheat straw particle size distribution was studied through image analysis; distribution curves for length and width of the particles were recorded in two stages of the project: previous and after compounding the natural material with polypropylene. Morphology of wheat straw particles and wheat straw-polypropylene composites were analyzed by scanning electron microscopy (SEM). Thermal properties including melting temperature and crystallization temperature of composites and pure resin were obtained from differential scanning calorimetry (DSC) performed on the samples; percentage of crystallinity was also calculated from the heat of fusion obtained from those tests. Mechanical properties, such as flexural modulus and flexural yield strength, were accessed in a miniature materials tester. Water absorption of selected composite samples was evaluated after immersion of the samples in a water bath. Water absorption curves were used to calculate the water diffusion coefficient (diffusivity) of the composites. Image analysis revealed the changes in the wheat straw structure due to shear forces during processing and improvement of adhesion between matrix and filler in compositions containing coupling agent. Small changes in the percentage of crystallinity of the thermoplastic phase were observed in all composites tested. Flexural tests revealed behaviour trends for the composites tested. Water uptake appeared to be a severe problem on natural fiber composites due to color fading, dimension instability and significant weight gains. Results from this work allowed the determination of some effects of processing temperature, fiber loading and use of additives on the final properties of wheat straw- polypropylene composites, thus making contributions to the scientific work that has been realized on natural fiber composites.