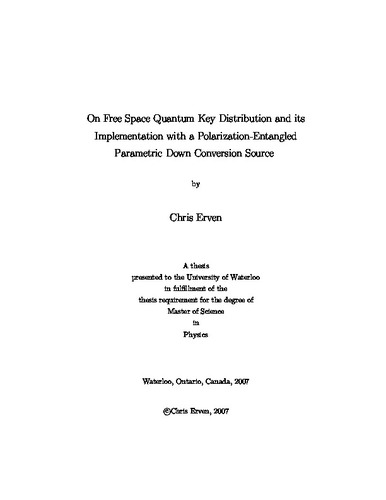 This thesis describes the deployment of a free-space quantum key distribution system across the University of Waterloo campus. The quantum key distribution system has the ability to provide unconditionally secure communication between two parties: Alice and Bob. The system exploits the quantum mechanical property of entanglement in order to generate a key. Security is then guaranteed by the No-Cloning theorem and the laws of quantum mechanics which prevent a quantum system from being measured without disturbing it. Polarization-entangled photon pairs are created using the non-linear optical process of type-II spontaneous parametric down-conversion. A free-space link of approximately $\mathrm{580~m}$ is used to distribute one-half of the pairs to Alice at a distant location, while the other half of the pairs are locally detected by Bob. The details of the detection apparatus necessary to measure the polarization of the photons and the software used to process the measurement data according to the BBM92 protocol are described. An experimental violation of the CHSH inequality (a derivative of the original Bell inequality) is demonstrated to show that polarization-entangled photon pairs are in fact being distributed to the two parties. Finally, the full BBM92 protocol is performed using the entangled photon pairs to generate a secure key and transmit an encrypted message between Alice and Bob. Currently, the system can only be operated at night because background light saturates the detectors during the day; however, future work will focus on making daylight operation feasible.

Chris Erven (2007). On Free Space Quantum Key Distribution and its Implementation with a Polarization-Entangled Parametric Down Conversion Source. UWSpace. http://hdl.handle.net/10012/3021