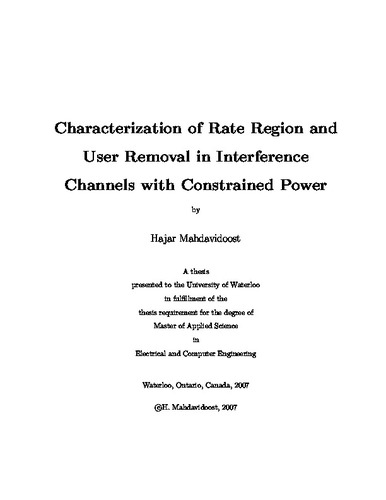 Channel sharing is known as a unique solution to satisfy the increasing demand for the spectral-efficient communication. In the channel sharing technique, several users concurrently communicate through a shared wireless medium. In such a scheme, the interference of users over each other is the main source of impairment. The task of performance evaluation and signaling design in the presence of such interference is known as a challenging problem. In this thesis, a system including $n$ parallel interfering AWGN transmission paths is considered, where the power of the transmitters are subject to some upper-bounds. For such a system, we obtain a closed form for the boundaries of the rate region based on the Perron-Frobenius eigenvalue of some non-negative matrices. While the boundary of the rate region for the case of unconstrained power is a well-established result, this is the first result for the case of constrained power. This result is utilized to develop an efficient user removal algorithm for congested networks. In these networks, it may not be possible for all users to attain a required Quality of Service (QoS). In this case, the solution is to remove some of the users from the set of active ones. The problem of finding the set of removed users with the minimum cardinality is claimed to be an NP-complete problem. In this thesis, a novel sub-optimal removal algorithm is proposed, which relies on the derived boundary of the rate region in the first part of the thesis. Simulation results show that the proposed algorithm outperforms other known schemes.