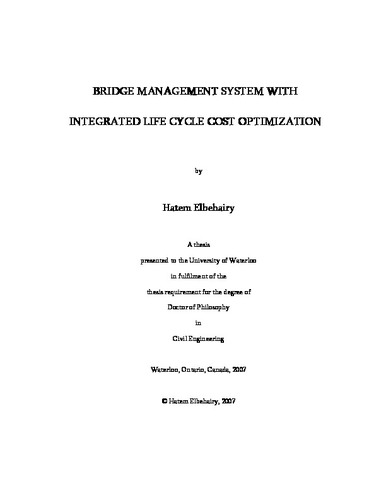 In recent years, infrastructure renewal has been a focus of attention in North America and around the world. Municipal and federal authorities are increasingly recognizing the need for life cycle cost analysis of infrastructure projects in order to facilitate proper prioritization and budgeting of maintenance operations. Several reports have highlighted the need to increase budgets with the goal of overcoming the backlog in maintaining infrastructure facilities. This situation is apparent in the case of bridge networks, which are considered vital links in the road network infrastructure. Because of harsh environments and increasing traffic volumes, bridges are deteriorating rapidly, rendering the task of managing this important asset a complex endeavour. While several bridge management systems (BMS) have been developed at the commercial and research level, they still have serious drawbacks, particularly in integrating bridge-level and network-level decisions, and handling extremely large optimization problems. To overcome these problems, this study presents an innovative bridge management framework that considers network-level and bridge-level decisions. The initial formulation of the proposed framework was limited to bridge deck management. The model has unique aspects: a deterioration model that uses optimized Markov chain matrices, a life cycle cost analysis that considers different repair strategies along the planning horizon, and a system that considers constraints, such as budget limits and desirable improvement in network condition. To optimize repair decisions for large networks that mathematical programming optimization are incapable of handling, four state-of-the art evolutionary algorithms are used: Genetic algorithms, shuffled frog leaping, particle swarm, and ant colony. These algorithms have been used to experiment on different problem sizes and formulations in order to determine the best optimization setup for further developments. Based on the experiments using the framework for the bridge deck, an expanded framework is presented that considers multiple bridge elements (ME-BMS) in a much larger formulation that can include thousands of bridges. Experiments were carried out in order to examine the framework’s performance on different numbers of bridges so that system parameters could be set to minimize the degradation in the system performance with the increase in numbers of bridges. The practicality of the ME-BMS was enhanced by the incorporation of two additional models: a user cost model that estimates the benefits gained in terms of the user cost after the repair decisions are implemented, and a work zone user cost model that minimizes user cost in work zones by deciding the optimal work zone strategy (nighttime shifts, weekend shifts, and continuous closure), also, decides on the best traffic control plan that suits the bridge configuration. To verify the ability of the developed ME-BMS to optimize repair decisions on both the network and project levels, a case study obtained from a transportation municipality was employed. Comparisons between the decisions provided by the ME-BMS and the municipality policy for making decisions indicated that the ME-BMS has great potential for optimizing repair decisions for bridge networks and for structuring the planning of the maintenance of transportation systems, thus leading to cost savings and more efficient sustainability of the transportation infrastructure.