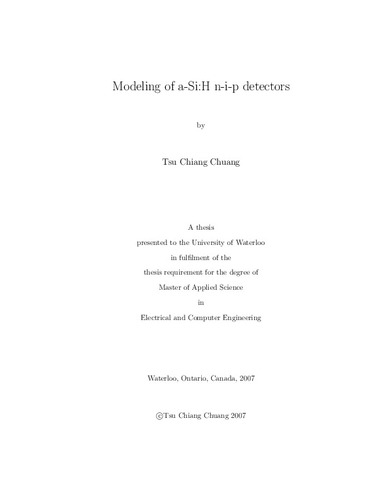 The widespread use of hydrogenated amorphous silicon (a-Si:H) devices prompted the need for models to identify challenges and solutions early on in the design process.Hydrogenated amorphous silicon photodiodes are commonly used as sensors in large area scanners. It is possible to describe a-Si:H n-i-p photodiodes using an empirical model, which this dissertation presents. Segmented a-Si:H n-i-p photodiodes of varying sizes were fabricated via plasma enhanced chemical vapor deposition. The dark current-voltage characteristics were then measured at different temperatures. Thecapacitance and the quantum efficiency of the devices were also characterized. Using simple semiconductor device equations and the observed empirical behavior, a model is built with a series of parameterized equations. The forward bias current characteristics are represented by the weighted sum of a low bias exponential relationship and a high bias power law relationship. The reverse bias current is modeled as the sum of the bulk thermal component and the edge leakage component. A linear bias dependent equation is used to represent the diode capacitance and a fourth order polynomial is used to model the quantum efficiency. The devices are characterized and the parameters are extracted from the empirical results. Good agreement has been obtained by comparing the results of the proposed model with the experimental results.