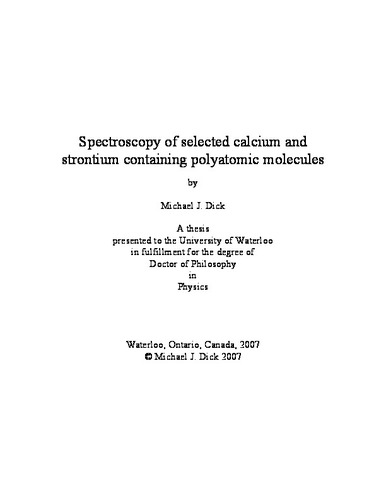 A spectroscopic study of several calcium and strontium containing molecules has been completed. In total, seven electronic transitions from six different calcium or strontium containing species were observed and analyzed at high resolution. Using laser excitation spectroscopy in a laser ablation source, the high-resolution spectra of the A2Π- X2Σ+ transition of SrCCH, the B2A1- X2A1 transition of CaCH3, the A2E- X2A1 and B2A1- X2A1 transitions of SrCH3, along with the B2E- X2A1 transitions of SrBH4 and CaBH4 have been recorded and analyzed. For each molecule, a geometric structure in the ground and excited states was estimated and the fine structure constants for the excited state were investigated. A comparison of these geometries and parameters with those of other calcium and strontium containing species has yielded important information on bonding and electronic structure. For the A2Π state of SrCCH, the B2A1 state of CaCH3, and the A2E and B2A1 states of SrCH3, it was found that these states arise predominantly from pσ or pπ atomic orbitals located on Ca+ or Sr+ ions, consistent with the analogous states of CaF, SrF, CaOH and SrOH. For the B2E states of SrBH4 and CaBH4 a similar analysis showed an increased amount of d-atomic orbital character in these states. The D state of CaOH was investigated at high resolution using optical-optical double resonance spectroscopy in a Broida oven source. An analysis of the resulting molecular constants showed that the Ca-O bond length and spin-rotation parameter of the state have the smallest values of those for all the observed 2Σ+ states of CaOH. This evidence suggested that the D2Σ+ state arises from a Ca+ atomic orbital of mainly 5sσ character. This atomic orbital assignment was shown to be consistent with both previous work on CaF and recent theoretical calculations on CaOH.