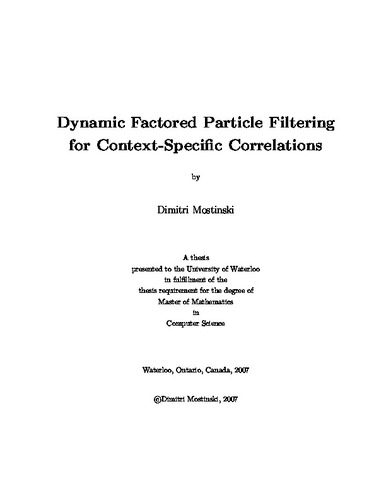 In order to control any system one needs to know the system's current state. In many real-world scenarios the state of the system cannot be determined with certainty due to the sensors being noisy or simply missing. In cases like these one needs to use probabilistic inference techniques to compute the likely states of the system and because such cases are common, there are lots of techniques to choose from in the field of Artificial Intelligence. Formally, we must compute a probability distribution function over all possible states. Doing this exactly is difficult because the number of states is exponential in the number of variables in the system and because the joint PDF may not have a closed form. Many approximation techniques have been developed over the years, but none ideally suited the problem we faced. Particle filtering is a popular scheme that approximates the joint PDF over the variables in the system by a set of weighted samples. It works even when the joint PDF has no closed form and the size of the sample can be adjusted to trade off accuracy for computation time. However, with many variables the size of the sample required for a good approximation can still become prohibitively large. Factored particle filtering uses the structure of variable dependencies to split the problem into many smaller subproblems and scales better if such decomposition is possible. However, our problem was unusual because some normally independent variables would become strongly correlated for short periods of time. This dynamically-changing dependency structure was not handled effectively by existing techniques. Considering variables to be always correlated meant the problem did not scale, considering them to be always independent introduced errors too large to tolerate. It was necessary to develop an approach that would utilize variables' independence whenever possible, but not introduce large errors when variables become correlated. We have developed a new technique for monitoring the state of the system for a class of systems with context-specific correlations. It is based on the idea of caching the context in which correlations arise and otherwise keeping the variables independent. Our evaluation shows that our technique outperforms existing techniques and is the first viable solution for the class of problems we consider.