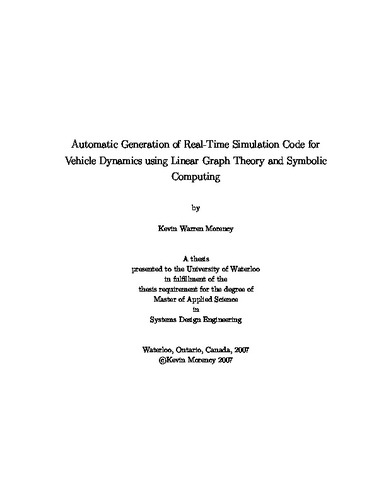 In recent years, hardware-in-the-loop (HIL) simulation has assumed a prominent role in the vehicle development process. A physical part, which may be a prototype at any stage of development, is tested, while the rest of the vehicle is represented by a mathematical model. Vehicle models used with hardware-in-the-loop must be capable of simulating an event in less time than it takes the event to occur in reality. Fast simulation necessitates a model that is represented by very efficient simulation code. This thesis presents a procedure for automatically generating this simulation code, given a description of the vehicle as input. For this work, a symbolic formulation procedure based on linear graph theory and the principle of orthogonality is used to generate governing equations for vehicle systems; this procedure forms the basis of the DynaFlexPro software package. In order to generate simulation code for vehicle dynamics studies, the DynaFlexPro component model template was extended to include rules for calculating intermediate variables and rules for calling external functions. These changes enabled the development of a tire component model, known as DynaFlexPro/Tire, that adds critically important (and computationally efficient) blocks to the overall vehicle simulation code. The combination of DynaFlexPro and DynaFlexPro/Tire allows analysts to construct a model for any vehicle topology and gives analysts great freedom to define how tire forces and moments will be calculated. Simulation code describing the vehicle model is automatically generated using symbolic computing techniques. The accuracy of the approach was validated by comparing results for DynaFlexPro vehicle models to results for equivalent models developed in a well-established tool for vehicle dynamics simulation (MSC.ADAMS). Two different vehicle models were constructed using DynaFlexPro and DynaFlex- Pro/Tire: a generic 4-wheeled vehicle with independent suspension and an articulated forestry skidder. Both models had an open-loop topology. When appropriate modeling variables were selected, each model was described by a minimal set of ordinary differential equations (ODEs) and the simulation code generated by DynaFlexPro was capable of being used for hardware-in-the-loop applications; the braking and handling behavior of the example models was simulated faster than real-time on a desktop PC with a 3.2 GHz Pentium 4 processor and 1 GB of RAM. For the same vehicle models, a different choice of modeling variables resulted in a mixed set of differential and algebraic equations (DAEs); in that case, HIL-capable simulation code could not be consistently generated. The approach works well for vehicle models described by ODEs, but more research is needed into the treatment of DAEs for real-time simulation of vehicle dynamics.