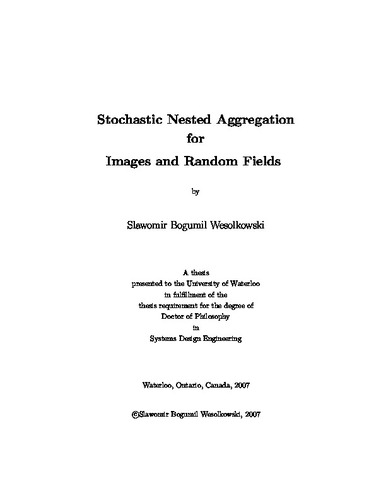 Image segmentation is a critical step in building a computer vision algorithm that is able to distinguish between separate objects in an image scene. Image segmentation is based on two fundamentally intertwined components: pixel comparison and pixel grouping. In the pixel comparison step, pixels are determined to be similar or different from each other. In pixel grouping, those pixels which are similar are grouped together to form meaningful regions which can later be processed. This thesis makes original contributions to both of those areas. First, given a Markov Random Field framework, a Stochastic Nested Aggregation (SNA) framework for pixel and region grouping is presented and thoroughly analyzed using a Potts model. This framework is applicable in general to graph partitioning and discrete estimation problems where pairwise energy models are used. Nested aggregation reduces the computational complexity of stochastic algorithms such as Simulated Annealing to order O(N) while at the same time allowing local deterministic approaches such as Iterated Conditional Modes to escape most local minima in order to become a global deterministic optimization method. SNA is further enhanced by the introduction of a Graduated Models strategy which allows an optimization algorithm to converge to the model via several intermediary models. A well-known special case of Graduated Models is the Highest Confidence First algorithm which merges pixels or regions that give the highest global energy decrease. Finally, SNA allows us to use different models at different levels of coarseness. For coarser levels, a mean-based Potts model is introduced in order to compute region-to-region gradients based on the region mean and not edge gradients. Second, we develop a probabilistic framework based on hypothesis testing in order to achieve color constancy in image segmentation. We develop three new shading invariant semi-metrics based on the Dichromatic Reflection Model. An RGB image is transformed into an R'G'B' highlight invariant space to remove any highlight components, and only the component representing color hue is preserved to remove shading effects. This transformation is applied successfully to one of the proposed distance measures. The probabilistic semi-metrics show similar performance to vector angle on images without saturated highlight pixels; however, for saturated regions, as well as very low intensity pixels, the probabilistic distance measures outperform vector angle. Third, for interferometric Synthetic Aperture Radar image processing we apply the Potts model using SNA to the phase unwrapping problem. We devise a new distance measure for identifying phase discontinuities based on the minimum coherence of two adjacent pixels and their phase difference. As a comparison we use the probabilistic cost function of Carballo as a distance measure for our experiments.