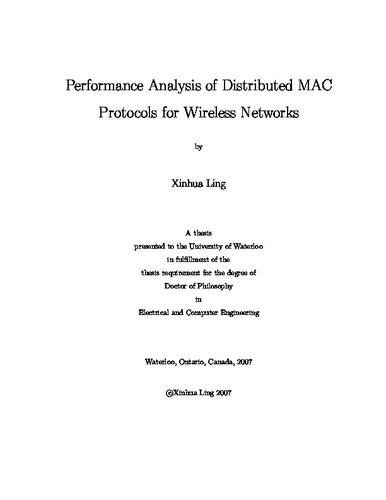 How to improve the radio resource utilization and provide better quality-of-service (QoS) is an everlasting challenge to the designers of wireless networks. As an indispensable element of the solution to the above task, medium access control (MAC) protocols coordinate the stations and resolve the channel access contentions so that the scarce radio resources are shared fairly and efficiently among the participating users. With a given physical layer, a properly designed MAC protocol is the key to desired system performance, and directly affects the perceived QoS of end users. Distributed random access protocols are widely used MAC protocols in both infrastructure-based and infrastructureless wireless networks. To understand the characteristics of these protocols, there have been enormous efforts on their performance study by means of analytical modeling in the literature. However, the existing approaches are inflexible to adapt to different protocol variants and traffic situations, due to either many unrealistic assumptions or high complexity. In this thesis, we propose a simple and scalable generic performance analysis framework for a family of carrier sense multiple access with collision avoidance (CSMA/CA) based distributed MAC protocols, regardless of the detailed backoff and channel access policies, with more realistic and fewer assumptions. It provides a systematic approach to the performance study and comparison of diverse MAC protocols in various situations. Developed from the viewpoint of a tagged station, the proposed framework focuses on modeling the backoff and channel access behavior of an individual station. A set of fixed point equations is obtained based on a novel three-level renewal process concept, which leads to the fundamental MAC performance metric, average frame service time. With this result, the important network saturation throughput is then obtained straightforwardly. The above distinctive approach makes the proposed analytical framework unified for both saturated and unsaturated stations. The proposed framework is successfully applied to study and compare the performance of three representative distributed MAC protocols: the legacy p-persistent CSMA/CA protocol, the IEEE 802.15.4 contention access period MAC protocol, and the IEEE 802.11 distributed coordination function, in a network with homogeneous service. It is also extended naturally to study the effects of three prevalent mechanisms for prioritized channel access in a network with service differentiation. In particular, the novel concepts of ``virtual backoff event'' and ``pre-backoff waiting periods'' greatly simplify the analysis of the arbitration interframe space mechanism, which is the most challenging one among the three, as shown in the previous works reported in the literature. The comparison with comprehensive simulations shows that the proposed analytical framework provides accurate performance predictions in a broad range of stations. The results obtained provide many helpful insights into how to improve the performance of current protocols and design better new ones.