Design, Modeling and Analysis of a Continuous Process for Hydrogenation of Diene based Polymers using a Static Mixer Reactor 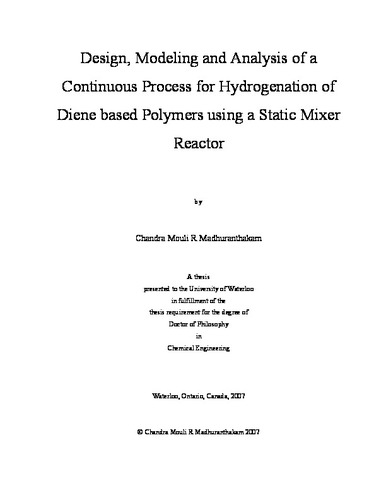 Hydrogenated nitrile butadiene rubber (HNBR) which is known for its excellent elastomeric properties and mechanical retention properties after long time exposure to heat, oil and air is produced by the catalytic hydrogenation of nitrile butadiene rubber (NBR). Hydrogenation of NBR is carried out preferably in solution via homogeneous catalysis. As yet, it is being commercially produced in a semi-batch process where gaseous hydrogen continuously flows into a batch of reactant polymer. Several catalysts have been exploited successfully for the hydrogenation of NBR in organic solvents, which include palladium, rhodium, ruthenium, iridium and osmium complexes. Owing to the drawbacks of batch production (such as time taken for charging and discharging the reactants/products, heating and cooling, reactor clean up), and the huge demand for HNBR, a continuous process is proposed where potential time saving is possible in addition to the high turn over of the product. Numerical investigation of the HNBR production in a plug flow reactor and a continuous stirred tank reactor showed that a reactor with plug flow behavior would be economical and efficient. A static mixer (SM) reactor with open-curve blade internal geometry is designed based on the simulation and hydrodynamic results. The SM reactor was designed with 24 mixing elements, 3.81 cm ID and 90 cm length. The reactor has a jacket in which steam is used to heat the polymer solution. The hydrodynamics in the SM reactor (open-flat blade structure) with air-water system showed that plug flow could be achieved even under laminar flow conditions (Reh < 20). For a constant mean residence time, the Peclet number was varying such that it is 4.7 times the number of mixing elements (ne) used in the SM reactor. Empirical correlations were developed for gas hold up (εG) and overall mass transfer coefficient (KLa). The mass transfer experiments showed that high KLa, 4 to 6 times compared to that of the conventional reactors could be achieved in the SM reactor at particular operating conditions. Very important information on the Peclet number, liquid hold were obtained from the hydrodynamic experiments conducted with the actual working fluids (hydrogen, polymer solutions) in the SM reactor. The superficial gas velocity had an adverse effect on both Peclet number and liquid hold up. The viscosity of the polymer solution also had a marginal negative effect on the Peclet number while a positive effect on the liquid hold up. The hydrogenation performance with the homogeneous catalyst OsHCl(CO)(O2)(PCy3)2 was performed in the continuous process with SM reactor. Complete hydrogenation of NBR was possible in a single pass. The effect of mean residence time, catalyst and polymer concentration on the final degree of hydrogenation was studied. The minimum catalyst required to achieve degree of hydrogenation over 97% was empirically found and an empirical correlation was developed for degree of hydrogenation as a function of operating conditions and parameters. Hydrogenation in the SM reactor is modeled by using plug flow with axial dispersion model that is coupled with the concentrations of carbon-carbon double bond, hydrogen and osmium catalyst. The model involves coupled, non-linear partial differential equations with different dimensionless parameters. The proposed model was verified with the experimental results obtained from the hydrogenation and hydrodynamic experiments. The model could satisfactorily predict the degree of hydrogenation obtained from experimental results at various operating conditions. In general, the designed continuous process with SM reactor performed well and was an effective method of manufacturing HNBR on a continuous basis. The designed system is amicable to the industrial operating conditions and promises to be highly efficient and economic process for production of HNBR.