On the Security of Some Variants of RSA 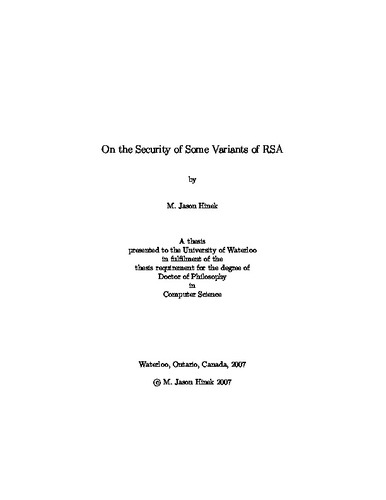 The RSA cryptosystem, named after its inventors, Rivest, Shamir and Adleman, is the most widely known and widely used public-key cryptosystem in the world today. Compared to other public-key cryptosystems, such as elliptic curve cryptography, RSA requires longer keylengths and is computationally more expensive. In order to address these shortcomings, many variants of RSA have been proposed over the years. While the security of RSA has been well studied since it was proposed in 1977, many of these variants have not. In this thesis, we investigate the security of five of these variants of RSA. In particular, we provide detailed analyses of the best known algebraic attacks (including some new attacks) on instances of RSA with certain special private exponents, multiple instances of RSA sharing a common small private exponent, Multi-prime RSA, Common Prime RSA and Dual RSA.